Saint Valintine’s Day is a international holiday observed on February 14 of each year. Even though it is not an official holiday people in almost all over the world just love it, so Riot decided to celebrate this event also in game. LoL celebrate this lovely event with new champions skins, icons for summoners, various ward skins and sometimes they create unique game modes like they did it in 2014. Before continue our list we would recommend you to consider to buy a ranked boost from Boosteria. Since 2012 were released 12 champions skins, full list of them:

So let’s take a look how Riot Games celebrate this holiday?

In their first Valentine’s Day they gifted a lovely card to all of us, where they announced new skin for Vayne – Heartseeker Vayne, and send to players a small, but lovely post: 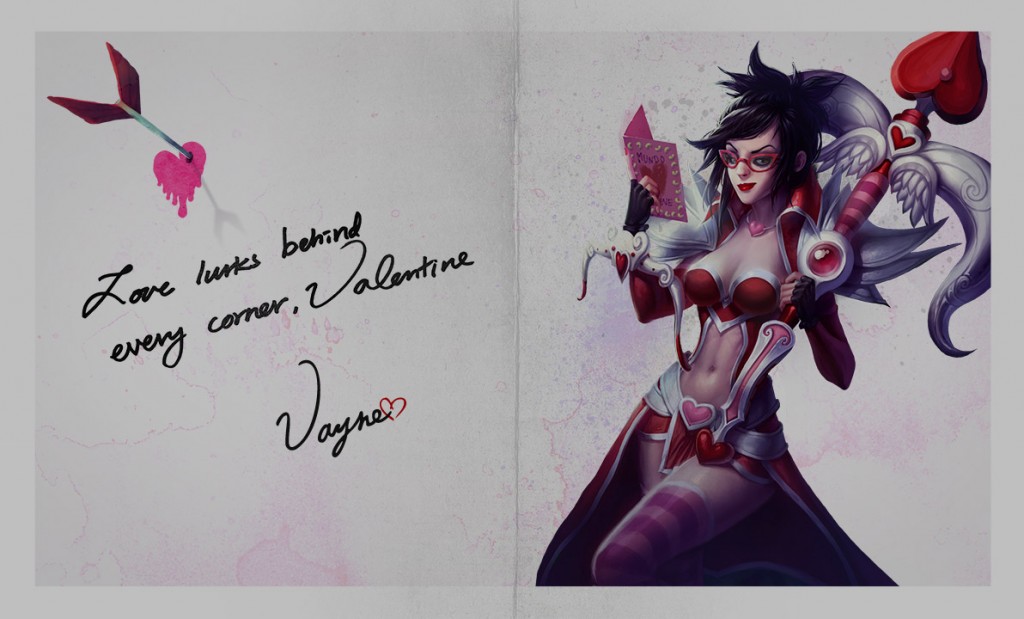 Valentine’s Day is here, and Cupid’s not the only bow-wielding cutie bound to be tugging at your heart strings this February! This holiday we’re rolling out a brand new skin for your favorite Night Hunter that’s sure to be love at first sight. Feast your eyes on Heartseeker Vayne!

Their next greeting was made a little differently, as the first page of some fashion magazine. Riot introduce to us their new theme skin – Debonair Jayce. This time, the outfit was not so revealing as it was in the last year. Jayce was dressed for the high standard of the upper circles of society and only hammer, carelessly abandoned on the shoulder, tell us that this is the famous champion of the League. 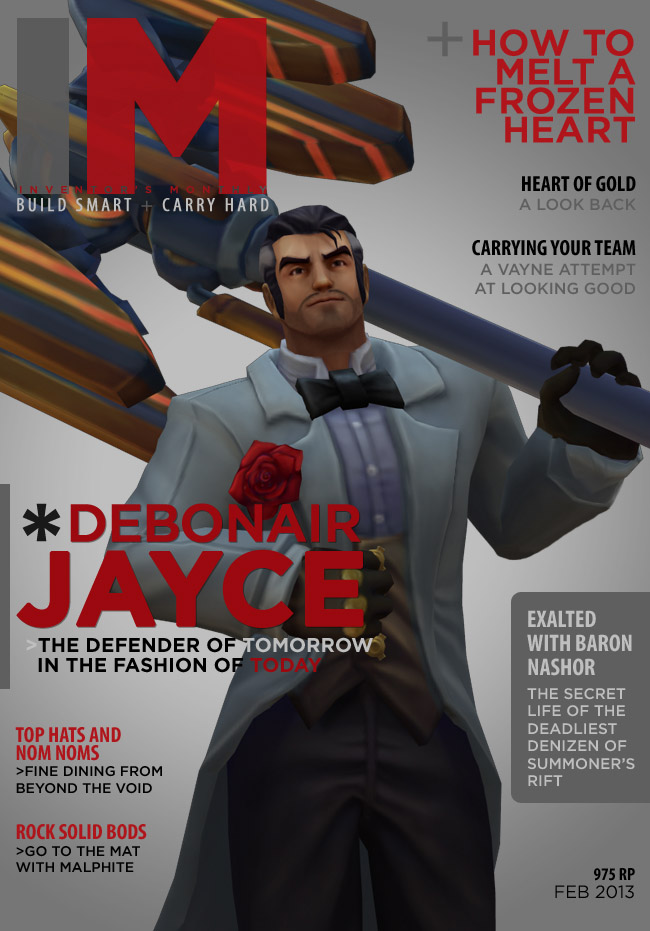 And this time, there was a little article from developers:

The room smells of mahogany and warm brandy, and I can tell by the leopard-skin hearthrug that the man I’ve come to interview is well-accustomed to company. They’re finishing the shoot in the foyer where Jayce, the Defender of Tomorrow, has suited up in the high fashion of today. In the meantime, I have free reign of the illustrious inventor’s sitting-room and I’m staring at the newest model of the world-famous Mercury Cannon-Hammer.

Slim and trim, and as stylish as the room I’m standing in, this iteration of Jayce’s signature weapon has refined lines and looks as clean as Piltover’s finests’ sterilized holding cells – not that I’ve seen them, of course. When we met last night, Jayce told me with his trademark wit about the new effects that issue from the cannon’s powerful blasts.

The door swings open and dapper Jayce strides with the effortless grace of someone who has more awards than bottles of wine despite a cellar the size of an Ionian temple. Dressed to the skies with a white overcoat and charming rose boutonniere, Jayce has picked up a confident swagger and a noticeable change in his voice…

That was a really perfect day for a fans, because in this year Riot was a too generiusly and released 3 (!) champion skins and one theme ward.

Also they introduce a new system – now you can send a Valentine’s Cards to a someone that you care. You still can download them here.

And the main thing that was created in 2014 – foundation of the League of Lovers, where all can share their romantic themed arts, poems or fan made videos about LoL. This site still works, and there you can find some really cute images.

LOVE IF A BATTLEFIELD

This year was unique in his own way, some Rioters decided to start a little event that called Love is a Battlefield, they created simple rules for 2 type of matches where you could play with, or agains Riot team.

At this map Rioters would play as Debonair Jayce, Heartseeker Vayne and Heartseeker Ashe and they will try to take on all opponents, of course these 3 champions are clearly not created for that map, but who care about balance? It is all about the fun! So map rules was same, but the main thing of this event – to beat some Roit guys in a “fair” fight!

And second event that they introduced was – Protect the Queen. You and your opponents team will have 1 Riot guy. Rioter from the one team will play as Heartseeker Vayne, while the other will have Heartseeker Ashe. Rules were really simple – protect your Queen at any cost! If your Queen will die 10 times, then your team would lose the match. Or if you defend your Queen really good, then enemies could win by the standart – win on Dominion. Of course Rioter would not hide while he play as a Queen.

Oh, i forgot to introduce new champions skins? I just can’t tell much about theme, except that they are all nearly perfect fit with the Valentine’s Day spirit. Just look at them by yourself: 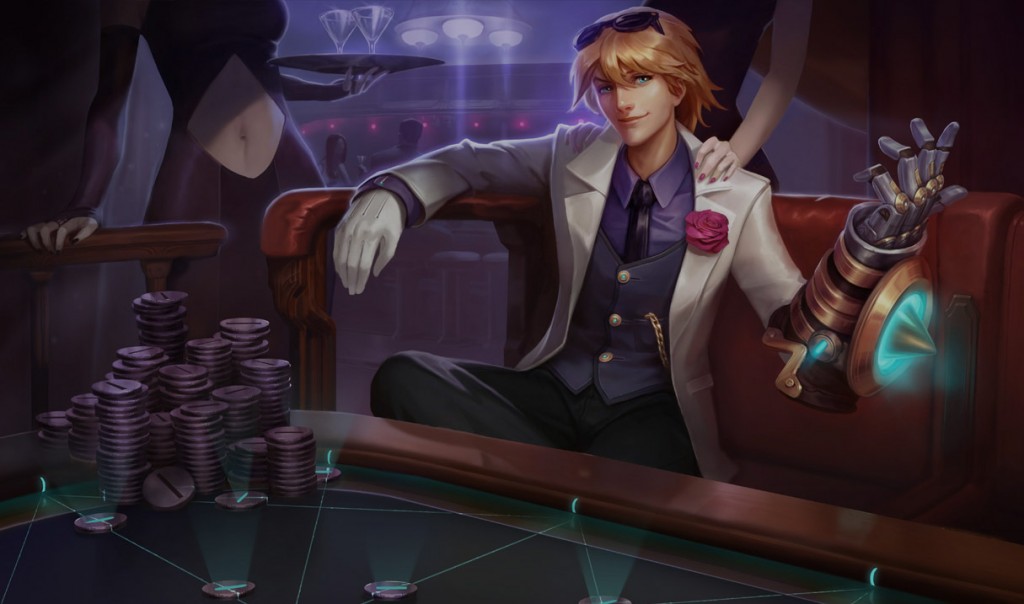 At this Valentine’s Day Riot meet us with a little lovely poem:

And Tibbers burns for you!”

Like the past year you could send League themed Valentines, that were created by Riot with cooperation with Oskar Vega, quite famous artist that create a awesome art about LoL.

“Let’s show appreciation for our teammates this Valentine’s Day with these heartfelt cards created in collaboration with community artist Oskar Vega.”

Here a few examples of these League Valentines: 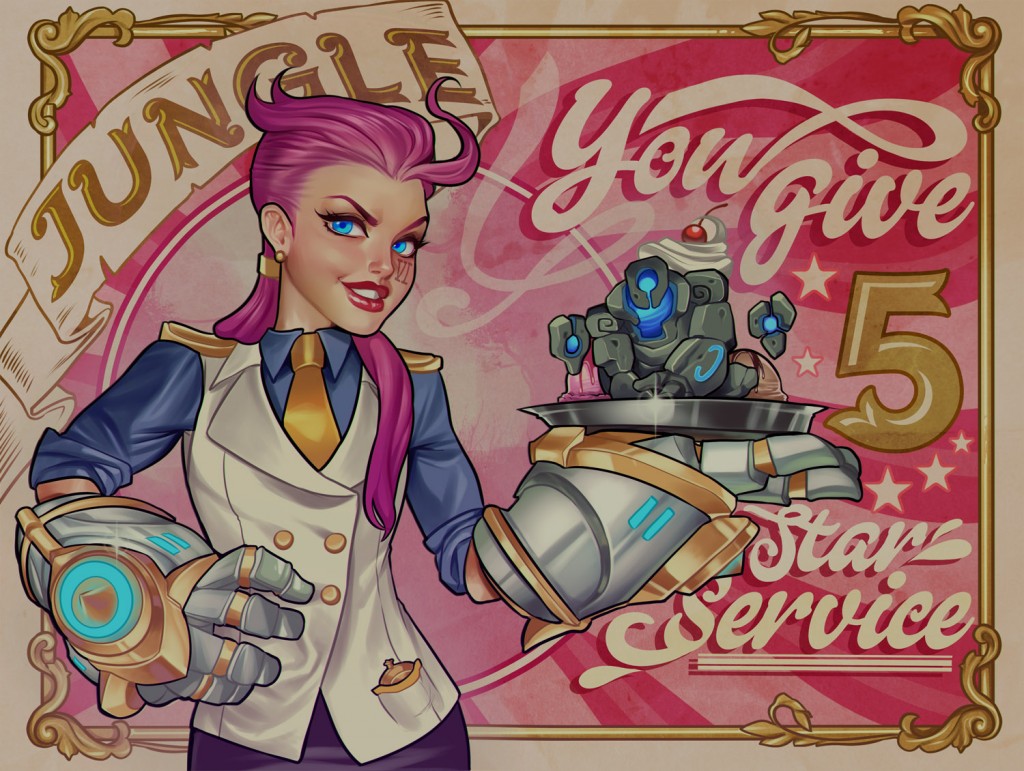 Of course they do not forget about champion skins, and in this year the decided to choose such heroes as Annie (Sweetheart Annie), Varus (Heartseeker Varus) and Galio (Debonair Galio).

“His calculations are so precise, Vel’Koz asks him for help with geometry.

His singing in the shower is so breathtaking, it stole Sona’s voice.

He once stepped on a mushroom and Teemo exploded.

The Most Interesting Gargoyle-like Construct in the World.” 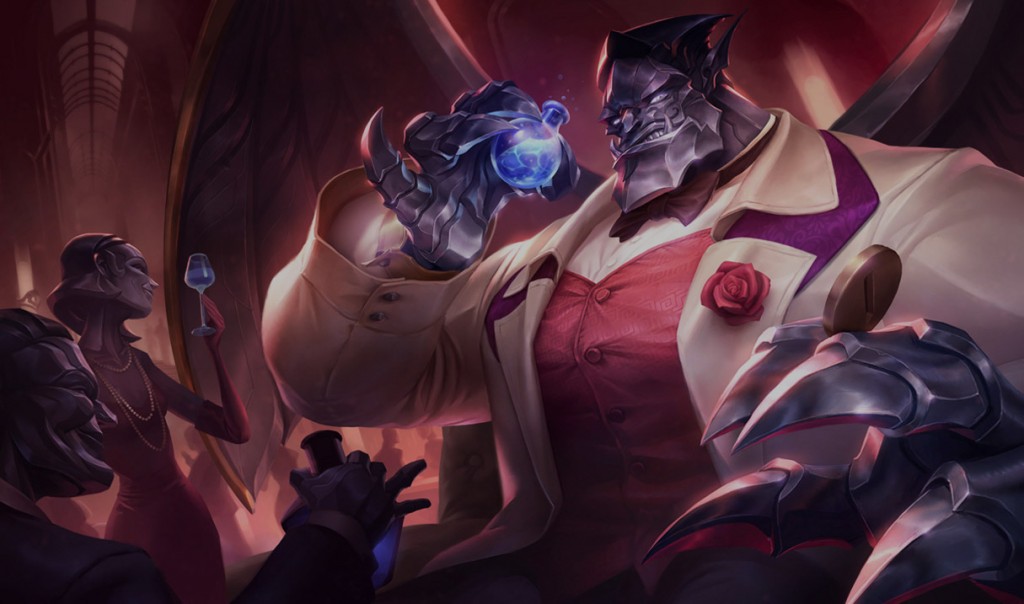 The most stylish Gargoyle Past year’s Valentine’s Day was nice, and Riots made Valentines in collaboration with a great artist and huge fan of the LoL –Rachel J Corey and she draw these cuties for us: 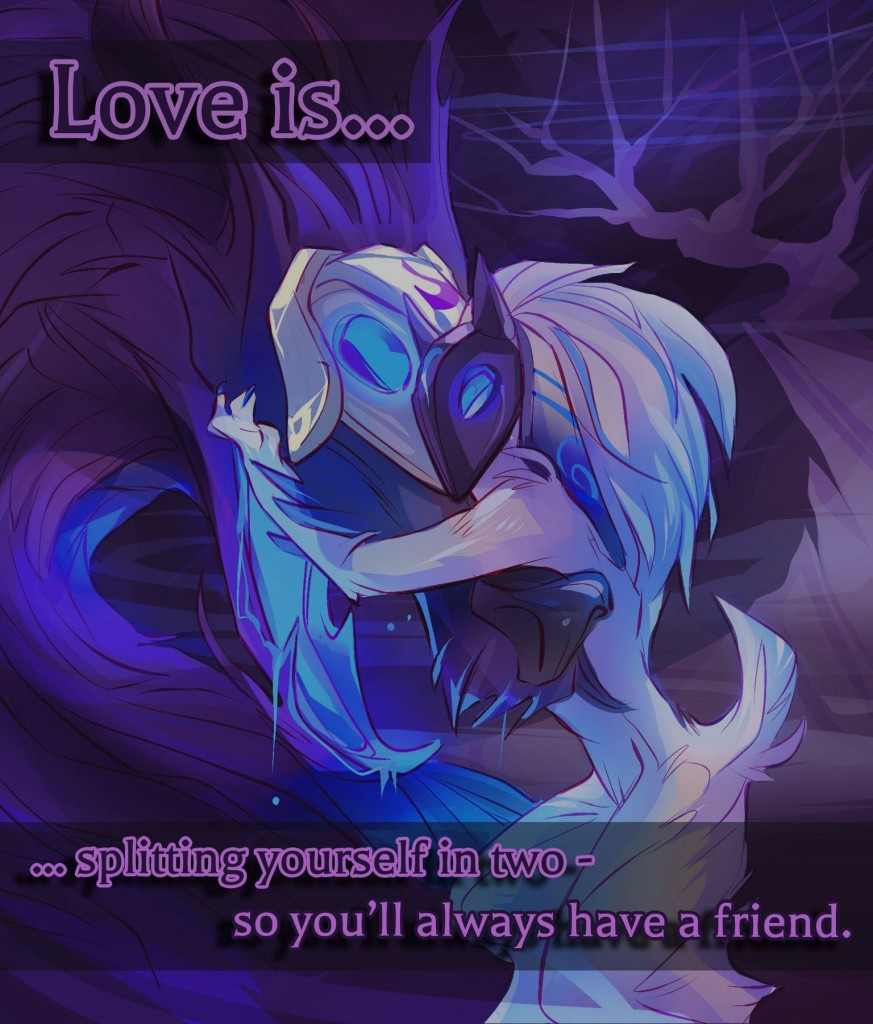 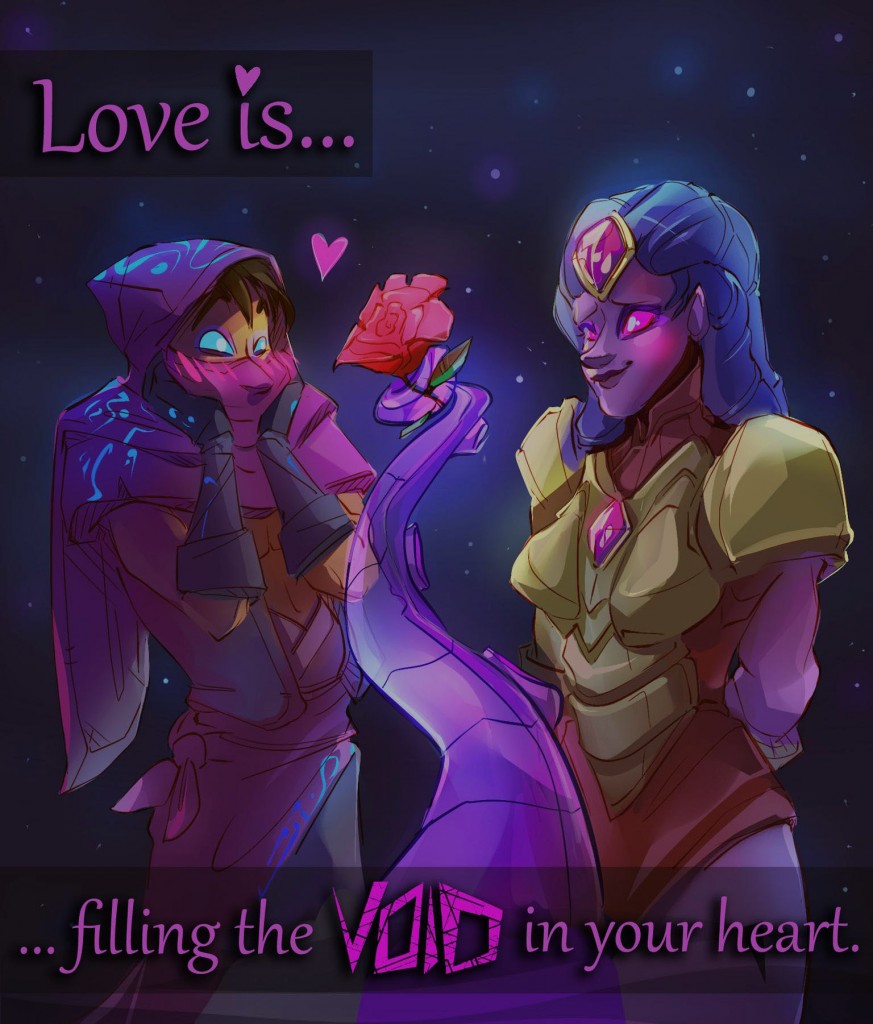 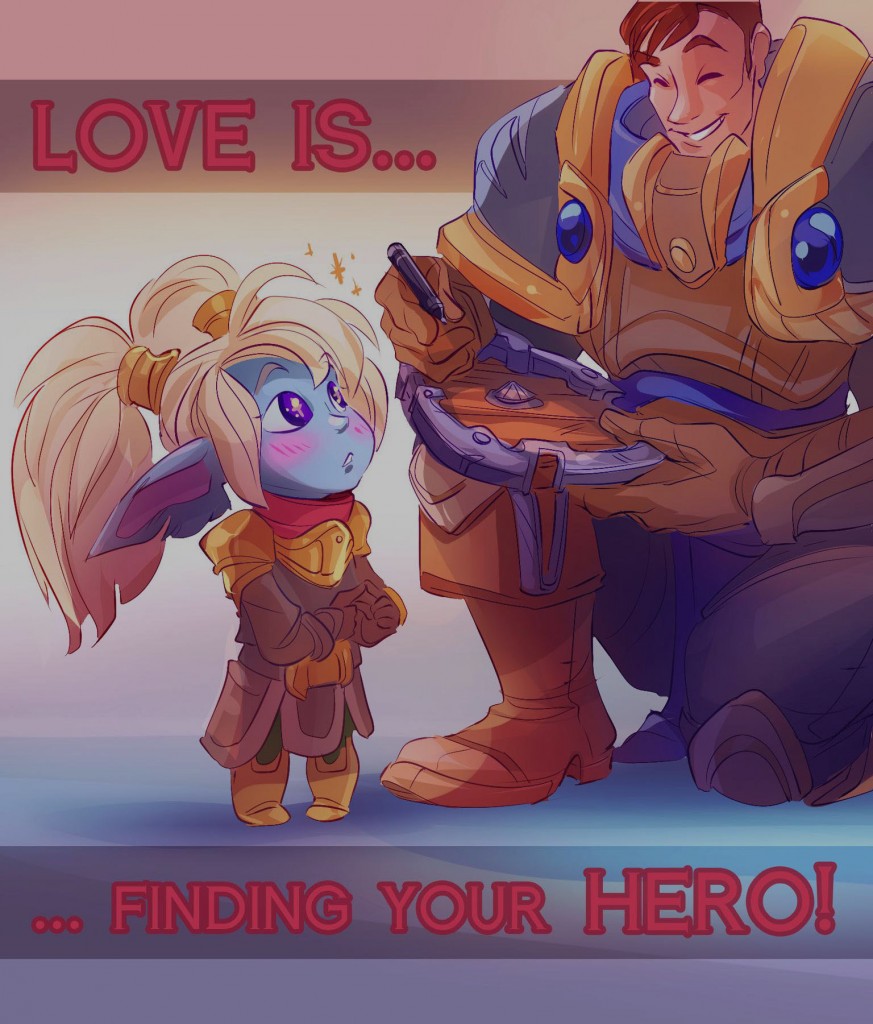 Love is in the air! Teemo is blowing kisses instead of darts, Tahm Kench is slipping even more tongue than usual and – whether you’re in bot lane, jungle or top – there’s no escaping Fifty Shades of Graves.

That’s right, it’s coming up on Valentine’s Day, and while nobody is expecting hostilities in LoL to cease completely, Summoner’s Rift is as susceptible to the romance of the season as anywhere else.

That’s why we’re pleased to unveil a collaboration with amazingly talented community artist Rachel J Corey, who you may have seen featured in /ALL Chat’s Summoner Showcase last year for her amazing LoL fan artwork. Rachel has put together five unique cards so that you can celebrate your love of League throughout your romantic endeavours.

So have a Happy Valentine’s Day – and if you see us on the Rift, feel free to give us a cuddle before you blow our brains out!

And of course – Champion skins! in 2016 Orianna and Sona transformed into Heartseeker Orianna and Sweetheart Sona. I think that most of you saw this year’s holiday with your own eyes, but for those who missed we have a little paragraph dedicated to Saint Valentine’s Day here.

I really like how Riot Games collaborated with various artist each year to draw Valentine’s postcards. Style changed every year and they helping those artist to became more famous, so this year they decided to work with Zuqling (as Riots say, they have a huge crush on all his works). And i think that they did a righ choice, i think anyone will have a crush on these arts from a first sigh. 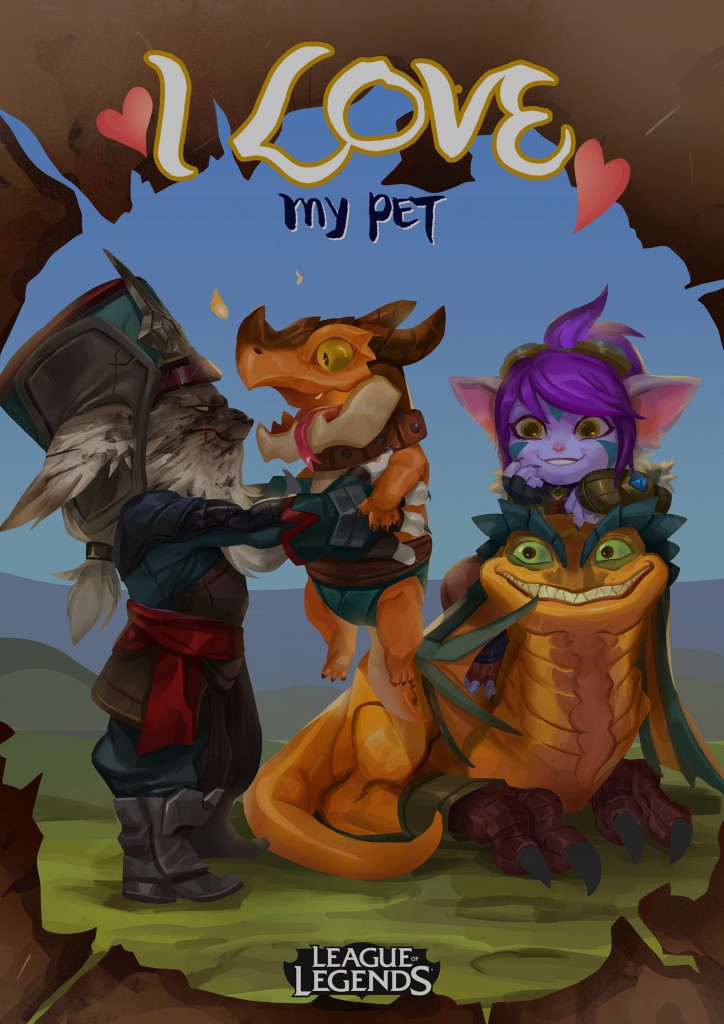 This year to the Valentine’s Day special forces joined Heartseeker Quinn, and Heartseeker Lucian. Their images were reworked to fit the spirit of this holiday: So after my little research into the depths of the Valentine’s Day history of LoL, i can surely tell, that Riot Games have done a really titanic work.

All these cooperations with their fan base, from arts for the Valentines, to their events. And all that was done nearly perfect. I really happy that Riot dont fall into stagnation and release with every holiday new, unique content starting from skins, wards, icons, and ending with special events, gameplay changing modes and many more funny stuff.