Since LoL has been launched by Riot Games, they never miss an opportunity to celebrate April Fool’s Day. Before article begins we recommend you to take a look at our prices on lol boost. Now let’s look at april first jokes over the years:

At this year Riot Games announced Urf the Manatee as a champion for a beta test which was obvious April first joke.

Despite the traditionally peaceful ways of his people, Urf, the Manatee, idolized the strength and prowess of Champions in the LoL and strived to become one. Of all the League’s Champions, there was none that Urf admired more than Jax, Grandmaster at Arms. Since the introduction of the arena, no man has forced the LoL to revise their regulations more often than Jax, and the self-proclaimed Grandmaster at Arms rattled off a streak of 152 consecutive wins. In order to compensate for the extreme power of this Champion, the League created special sanctions for Jax: He is only allowed to fight with weapons the League deems suitable. For now, that list includes a lamppost, a chicken’s foot, a spatula, a fishing rod and a cardboard tube.

In his admiration and pursuit to become a weapons master like Jax, Urf has equipped himself with the two great symbols of his Manatee heritage as his weapons: a fish (to symbolize the bounty and providence of the sea) and spatula (to pay homage to his people’s age-long pursuit for culinary mastery). Urf now begins his aquatic journey as the League’s first Manatee Champion, hoping one day he will have the opportunity to cross fish and spatula with chicken’s foot and lamppost. But Urf the Manatee did not appear…

This year players received explanation why they couldn’t play as Urf The Manatee last year: he was murdered by by

Warwick while he was guarding rivers on the Summoner’s rift:

Unfortunately, today, the story of Urf Day took a tragic turn, for as Urf was swimming along, dutifully guarding the river in the Summoner’s Rift, he met with a tragic demise. Eye-witness accounts have been unreliable at best, but everyone seems to agree that just before it happened a blue streak was seen darting out of the nearby jungle. A great clamor ensued, followed by the doleful screams of a manatee done wrong. In the end, all that was left of this brave prince amongst sea cows was his skin… and even that was stolen by this most nefarious of perpetrators.

Now any good story needs a moral. So if there’s anything that the story of Urf Day and the story of the Big Bad Wolf have in common, it’s this: deep within every wolf, there is a cunning master of disguise just waiting to get out. Take WarwickSquare.png Warwick, for instance; a giant, bloodthirsty werewolf able to cunningly adapt by blending into even the most innocent of surroundings. He could be anywhere at any time… behind a rock, in the brush, in the jungle, or cleverly masquerading as a lovable, spatula-wielding manatee.

Warwick’s Urf The Manatee skin with 99% discount only for 50 RP: 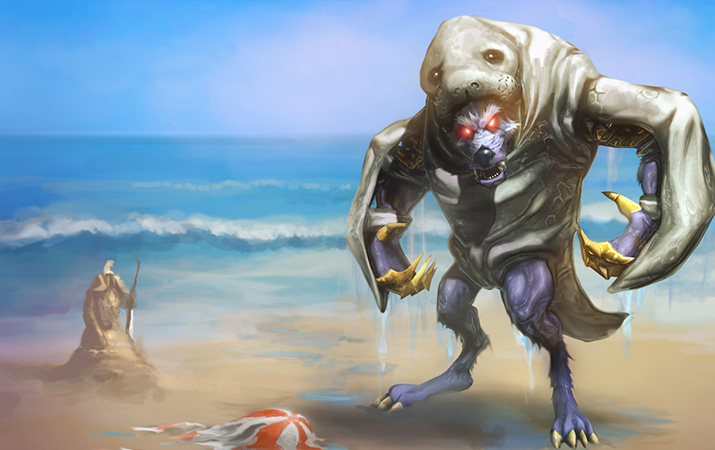 If you want to ensure that your Blood Hunter appears completely inconspicuous to even the most wary of foes, be sure to snatch up the Urf the Manatee skin, on sale now in the LoL store. Now, you’ve all heard about Legendary skins. And so, in light of the recent events, Marketing has determined that the Urf the Manatee skin is now even more Legendary than we had originally anticipated. As such, Warwick’s WarwickSquare.png Urf the Manatee skin will be available at the cost of 5,000 RP. However, in the interests of giving everyone the opportunity to pay their respects to this magnificent mammal, Marketing has also agreed to offer this tribute to his splendor at 99% off for one week only. That’s right: I said 99% off! At a cost of only 50 RP, you have no reason to shirk paying tribute to the passing of this brave soul!

During the second week of availability, the Urf the Manatee skin will be purchasable for 500 RP (still not a bad deal, considering that’s 90% off). And on Urf’s final day, if you haven’t yet snatched him up, you’ll have one final chance to do so for 5000 RP. So hurry and fire up the LoL store, already! It’s Urf Day!
Urf the Manatee’s final resting place is the Skins section of the Store. Our thoughts and prayers go out to the victim’s family.”
R.I.P. Urf the Manatee April 1st, 2009 – April 1st, 2010.

Urf joke become so popular that it was started to be used each year.

Along with the patch notes there was new champion’s

Lee Sin fun spotlight made by Phreak. This spotlight is direct reference to popular jokes about Chuck Norris:

Our old friend Urf the Manatee appeared on 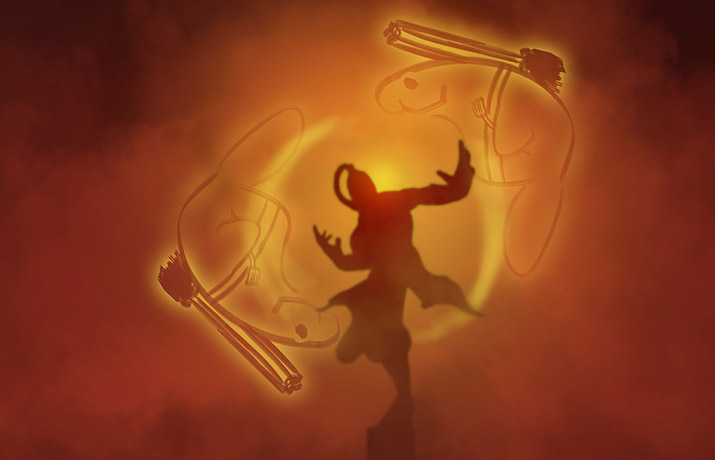 Corki has been released: 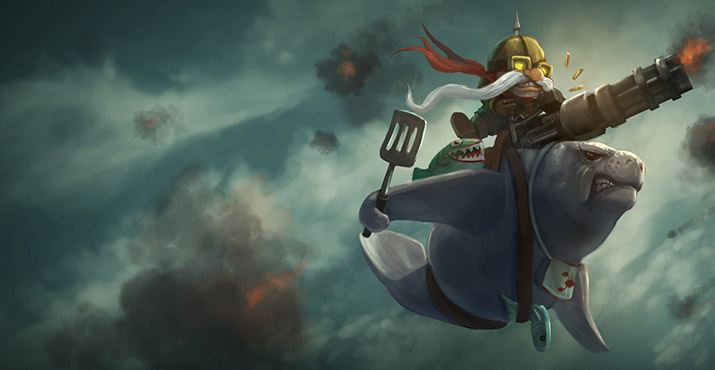 This year was a poor on jokes. Fisherman 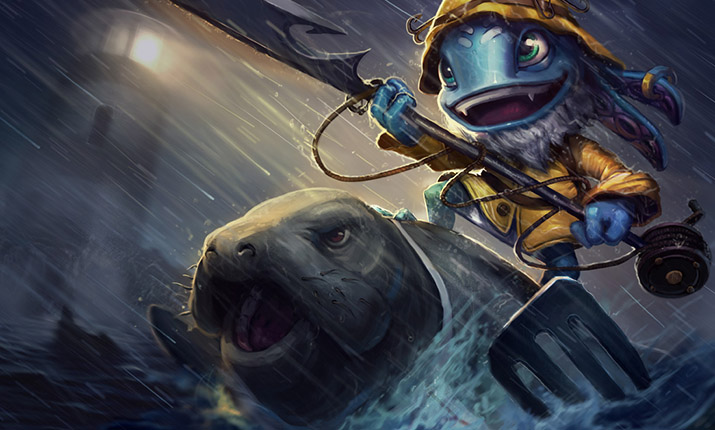 This time Riot Games have developed two flash games in arcade genre. We have hosted them both for you since they are pretty fun: 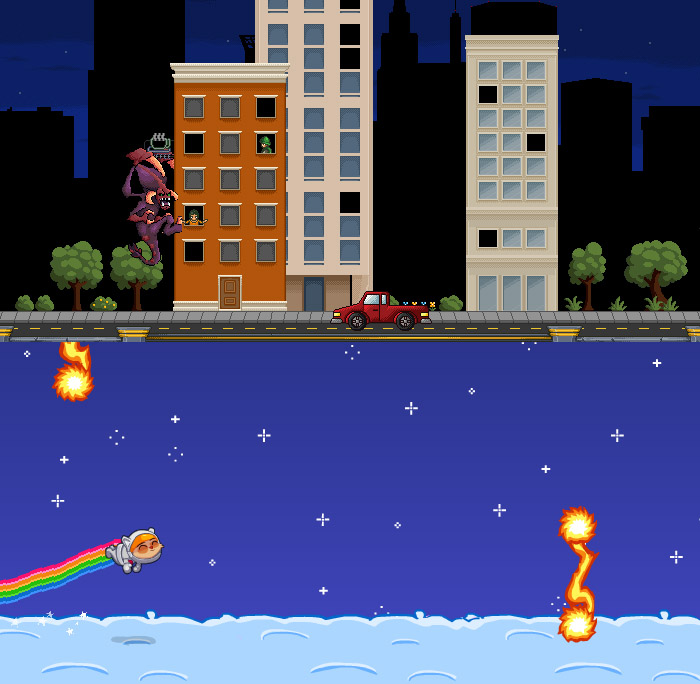 We decided that Brand’s “hotness” was too much to accommodate this games ESRB rating.

We decided that allowing the summoner to control Mundo’s movement was actually preventing Dr. Mundo from going where he pleases.

We realized that changing Kassadin was a bad idea. He was perfect, and this was something the community wasn’t actually interested in. To apologize to the Kassadin players out there, we gave him some minor buffs.

We think this new feature would really add a new layer of gameplay choices for him while keeping in tune with his theme.

Nami’s ultimate was being outclassed by those of other supports, such as support Ezreal and Ashe, so we’ve brought it to the same power level.

Pantheon hasn’t been seeing a lot of recent play, and is generally unable to apply any lane pressure, so we’ve buffed his ult a little and renamed him to reflect the changes.

Nasus felt a bit too slow, and we felt a change was needed to speed up his play.

Being raised to the position of Noxian High General entitles one to certain benefits, such as premium health care. Swain’s bad leg has been fixed.

LoL has gone a long way in terms of technical development. As we expand our horizons, we’ve decided to experiment with some new tech on a few existing champions.

The changes to Twisted Fate have made him unpopular. He’s still powerful, but the problem stems from the fact that players find him boring and too predictable. We’ve re-enabled and added in some new RNG elements to give players that “lucky draw” feeling.

The problem with Urgot was just players just didn’t find him visually appealing enough, so we all chipped in and got him a complete makeover.

Quality of life fixes and minor changes to better reflect his vampiric nature.

We feel that Vel’Koz is in a good gameplay spot, but feels thematically flat. We’ve introduced a minor change that should really give players a feel of his archetype.

We’ve had a long running discussion about how we can change Yasuo without changing how he feels, and we’ve decided that having two passives is too good.

After a great deal of thinking, we realized that this still beats every other support item in the long run. We’ve decided to drop the pretense and make it as powerful as we want it to be.

We needed a way to make manaless champion even better in the current meta and this seem like the best way achieve our goal as it opens new build paths that were normally discarded because of the existence of mana regeneration.

You can watch TSM against Cloud 9 fun game in ULTRA RAPID FIRE mode:

There is bunch of new joke skins this year:

Yep, Urf joke is finally back with new Nami skin.

ORDER OF THE BANANA SORAKA

Also there was carnival on Latin America North, Latin America South and Brazil servers. As result of it we get a lot of adorable poros dressed as LoL champions. 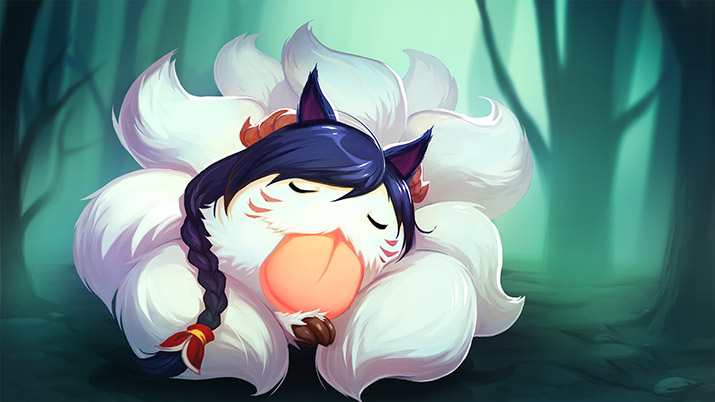 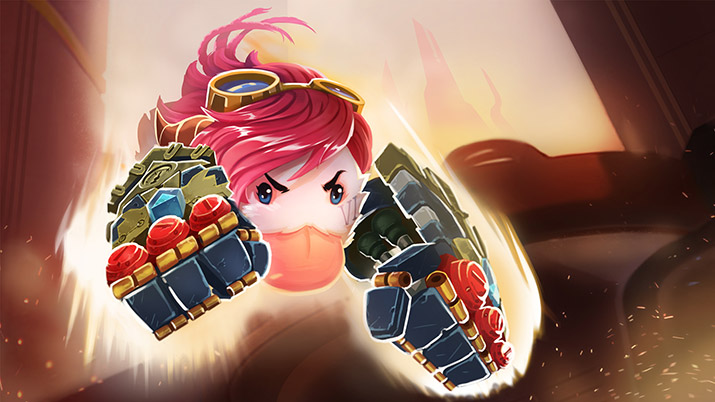 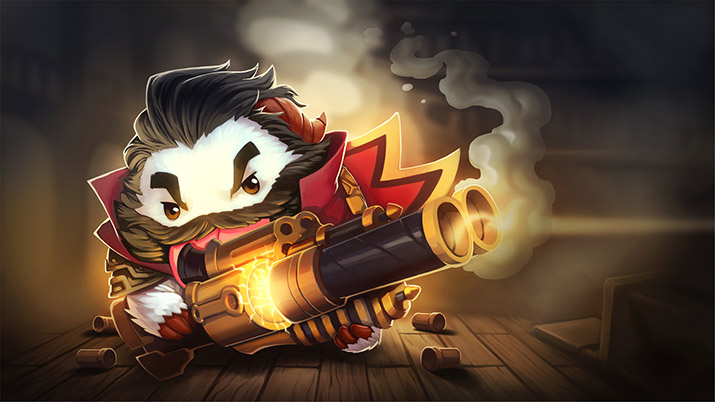 Ultra rapid fire mode for Summoner’s Rift is back!

Draven! This time Riot decided to get rid of the April Fool’s Day, but to compensate it they started a new Event, that changed the whole game! Now LoL is called as League of Draven, and all champions, minions, literally EVERYTHING now have Draven faces. And even Draven himself now look much more like a Draven than it was before. Some wonderful Draven things were added in the game, like Summoner icons and Ward skins. For an additional pay, you can unlock new champion skins that even DOESN’T look like a Draven!

League of Draven – Icons and Wards 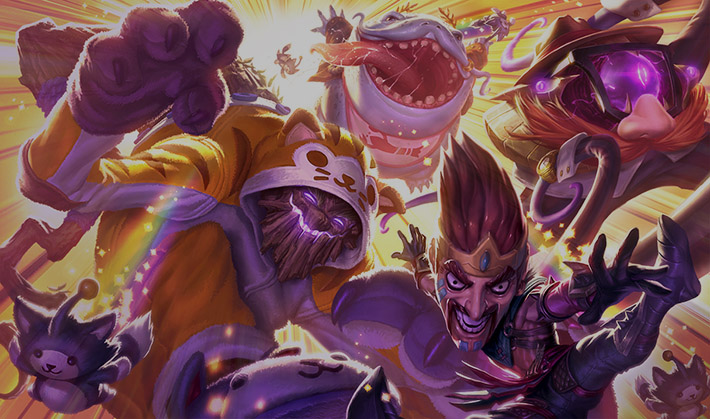 This year Riots tested brand-new bots, that have incredible artificial intelligence, self-improving program and other cool things. Those Bots are looks so real, they even act like a real person! But remember, that Riots still has an AFK penalty, so keep your rage by yourself, and play till the end! And there is nothing suspicious that they tested this from the first of April. An accidental coincidence!

Of course Riots do not forget about April Fool’s Day and released a bunch of laughable skins: You may be interested in our other guides and services that we provide: