Learn how to properly move around the map and rotate with this guide.

Map movements and rotations are standard and key if one wants to improve as a player. In this guide, there will be standard rotations for top, mid, jungle, and bot lane. Towers, Barons, and Dragons are all key objectives and objectives are mainly the reasons for rotations.

What Are Rotations and Map Movements?

Rotations are when a player moves his champions into certain locations because of a crucial objective point or marker e.g. baron, dragon, inhibitor, towers.

When Do Rotations Become Relevant in the Game?

Rotations usually start off with bot lane because there are a lot of early game objectives down bot lane, such as dragon and first tower gold. First tower gold bot lane is relatively easy to obtain due to the resistance of the tower not being so high pre 7 minutes into the game.

Which Objective is More Important?

All objectives are important. Which is why we call them objectives; however, some objectives are better and stronger than others and due to this information, we set up our map rotations accordingly. It is almost impossible to accordingly put a value on all objectives because in some cases objective X might be better than objective Y. For example, baron vs the first elder with 1 dragon. Of course, baron seems better because well it’s baron; however, the elder is to empower team-fights while baron impowers siege potential. If your comp is short ranged than elder might be the choice because you can just run over the enemy team but at the same time because your comp is short ranged maybe baron is better because you have some way of siege potential and vice versa with a comp made for sieging.

What Do You Do After First Blood Tower is Down?

It depends on where the tower falls.

If top tower falls first then there is no rotations because of dragon objective. It would make no sense for bot to rotate top due to there being a tower and drag bot lane. Mid lane stays because there is no kill pressure for top laners in the mid lane due to mid lane being a small lane.

If bot tower falls first then there are 3 textbook scenarios that should happen. 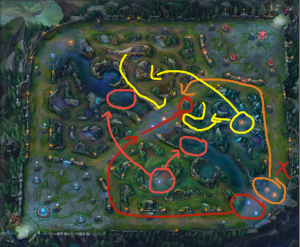 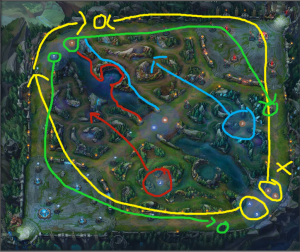 How Important is Mid Tower?

Mid tower is the most important tower of them all just due to the fact that it covers a wide range of the map and paths towards both side lanes and both baron and dragon. Losing the tower is extremely dangerous during specific timestamps. The time stamps are pre and post 20 minutes because of baron timer. If you’re able to hold onto mid lane until baron spawns then you’re able to hold a phalanx to defend and stall out the game while juggling vision control over baron.

If mid tower falls post 20 minutes and either team has a split pushing mid laner, they must go top and let bot lane hold mid. If either team has a wave clearing mage, rotations become more flexible with either mid or bot going top or mid because a viktor or anivia can easily hold vs 2 players. And then top laners duke it out bot because typically top laners have tp and mid laners have cleanse. ghost, heal, or barrier. It’s the most effective way to pressure baron with all 5 players and easy to converge upon mid lane for a fight or brawl.

If mid tower falls pre 20 minutes then whoever has that mid lane tower is at a massive disadvantage if they are playing a mage champion. The reason being the position and vision control you lose is massive because you’re most likely to clear mid lane slower than the opposing mid laner due to the safety of mid lane tower falling. Below is a before and after picture of the map you lose once mid falls.

As you can see holding a phalanx of that magnitude is disastrous. You would need to let both bot and top tower fall otherwise your top and bot laners become vulnerable to 4 or 5 man plays due to teleport with mid lane priority which then causes the game to be heavily in the favor of the enemy team either through picks or denying cs or just flat out tower gold. Once you do lose mid you also lose baron and dragon vision and control. Which further increases the snowballing and execution timing of the game making it harder to play around and makes you wait for your imminent doom.

Drastically. Rotations are the key to winning games. Correct rotations lead to more cs for the whole team, more vision control, better objective control. and better ways to make and create picks. If you’re able to execute rotations properly then you will be easily able to ascertain high diamond. Not only does it win you games but it will make you a better player and creates a foundation of which you’re able to add upon and build up to reach greater heights and better elo or mmr.

Rotations are very quinessential for not just winning games in LoL but also to play LoL. A massive map with 3 lanes and a massive jungle, anyone can easily make mistakes during the whole game process. From start to finish rotations and how you path your champions are at all stages of the game important. A small mistake can lead to a massive one sided victory for the other team and easily destroy your mental. Such small mistakes are very hard to find but once you find it you’re able to climb to new heights in LoL.