This guide will lay out the 3 steps to trading in lane. If you always follow these steps, you will never lose lane!

Trading in lane is arguably the most difficult, and important part of laning. Not only do you have to worry about CSing and using mana efficiently, but you also have to worry about what your opponent is going to be doing. There are 3 key things that someone looking to trade must always keep in mind: 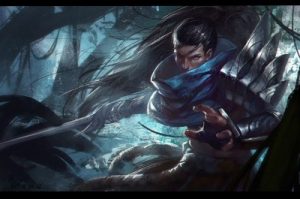 Step 1 is the most important thing before your first back. You’ve probably seen the tip “One round of auto’s from 3 caster minions causes more damage than any champion’s auto attack at level 1”. This is actually a true fact, so attacking the enemy champion in a wave of 3 casters is essentially giving them a free auto attack every couple of seconds, which in early levels is a HUGE advantage. So how do you know when to trade? First, even if you have more minions than your opponent, attacking them in their minion wave is still bad, as their minions will attack you, and your minions might not, and if they do, it definitely wont be all of them. So in order to trade, you should always make sure that there are close to no caster minions in early levels, or that your opponent is attacking you in your minion wave. As the game progresses to the later stages, minion damage doesnt matter nearly as much. The best time to use minion damamge is when a jungler ganks into a large wave of yours. If neither of them have aoe, your minions are almost like having a second champion with you. I have turned more ganks than I’ve died to using minions alone, ESPECIALLY in low elo.

You should always be tracking what abilities your opponent just used, and what summoners they have and you have. For example, when laning against an Ahri, you must be able to recognize that her using her Q or W will give you a HUGE advantage in a trade in the next 8-10 seconds. So if she uses her Q on the wave, you should instantly look for a trade (while at the same time keeping in mind all the other points I’ve made in this guide!) Another huge thing is summoners, especially in mid and bot lane. If youre playing in an ignite vs ignite lane, and the enemy doesnt have ignite, you have about a 270 true damage lead just by summoners alone! That is a huge advantage!

The third part about trading in lane, is knowing where the enemy jungler is. This is important for multiple reasons, mainly being that the jungler can back his laner up, and also clean up the kill even if you kill your laner. This is extremely imperative on champions that use their escape for harass. For example, Zed W is his only escape, however it is his main source of harass, as it doubles his E and Q potential. So if Zed uses his W to harass his enemy laner, this is a huge oppurtunity for the jungler to come and kill you. While laning, you must also think about who wins in a 2v2 fight, me and my jungler, or the enemy duo? This is because if you are the top laner, and your jungler is top so you feel safe to go in, and the enemy jungler ganks and your jungler arrives shortly after, and you both die, it is your fault for going in when the enemy jungler could be near, as you shouldve thought ahead as to who would win the 2v2.

I promise that if you keep these 3 things in your head everytime you trade, you will become a much superior laner and better player.