Once in the year, in the night during the Festival of Fire Blood Moon rises. Cultist look at Blood Moon as a sign – The heavens call for brutal sacrifice. And they began to slaughter anyone who they met, anyone who foolish enough to go outside in that horrific night. This guide is sponsored by Boosteria service – legit elo boosting provider.

Blood moon is Ionian term. But who are those Ionians and how this Blood Moon cult was born?

Ionia is a beautiful land of neutral magic. Inhabitants that living on those land are spiritual people. The try to find harmony and balance in everything. From their spiritual nature was born many orders and cults, that quickly spreads all across Ionia, and each of them follow it’s own patch.

Ioina was neutral land, before Noxus invade it’s lands. This brutal conflict was forced Ionia to fight for it’s place in this world. All these horrors of war born horrific cults and religions, so that’s how Cult of the Blood Moon was born.

Those cultist said that Blood Moon is a heavenly sign, that means that the need sacrifice in blood from every one, that walks under it’s light. So the began to slaughter every one who the met, despite their age. 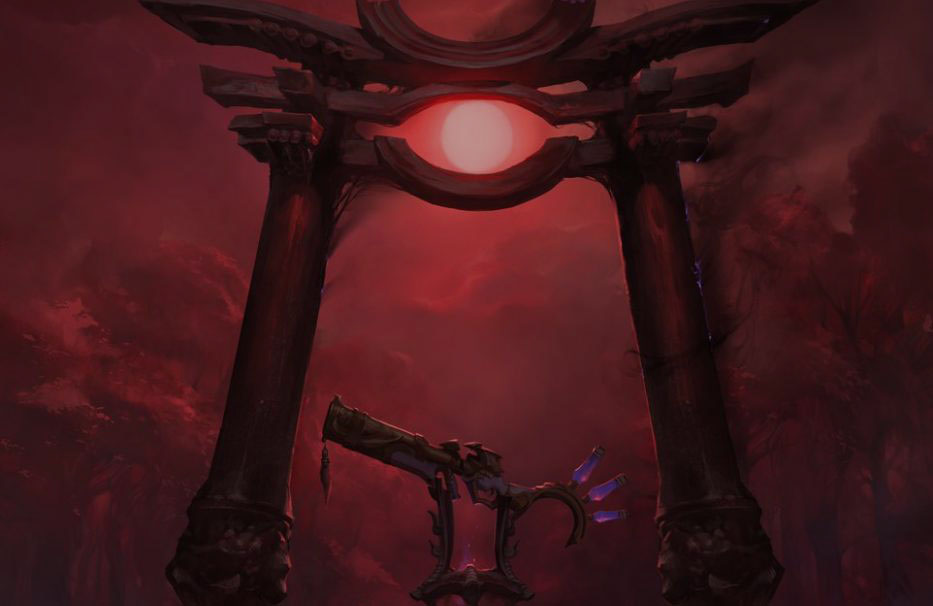 Blood Moon night mean a lot for all players of LoL: New Fascinating game mode, a lot of skins and icons, and pure fun. Riot games start this event in 2011 yers, where the add event that call’s “Hunt of the Blood Moon”.

HUNT OF THE BLOOD MOON | IN GAME EVENT IN LoL

This game mode divide players on 2 team. All players that play “Hunt of the Blood Moon” can choose only Assassin champions, they fight to secure the Blood Moon’s blessing and to gain the Power of a Demon. Team that have the biggest favor at the end of the match will win. This was the first mode, that limited champion pool. 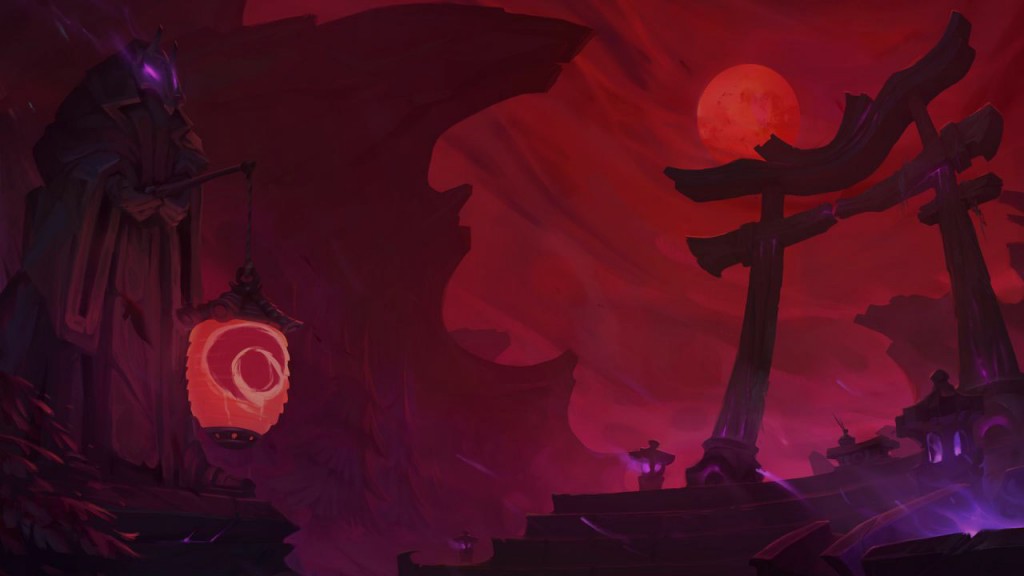 Hunt of the Blood Moon

List of all champions, that allowed during the Blood Moon:

Do not worry, if you do not have any of these champions in your champion pool, Riot games add 10 of them in Free to Play rotation during this lol blood moon game mode. 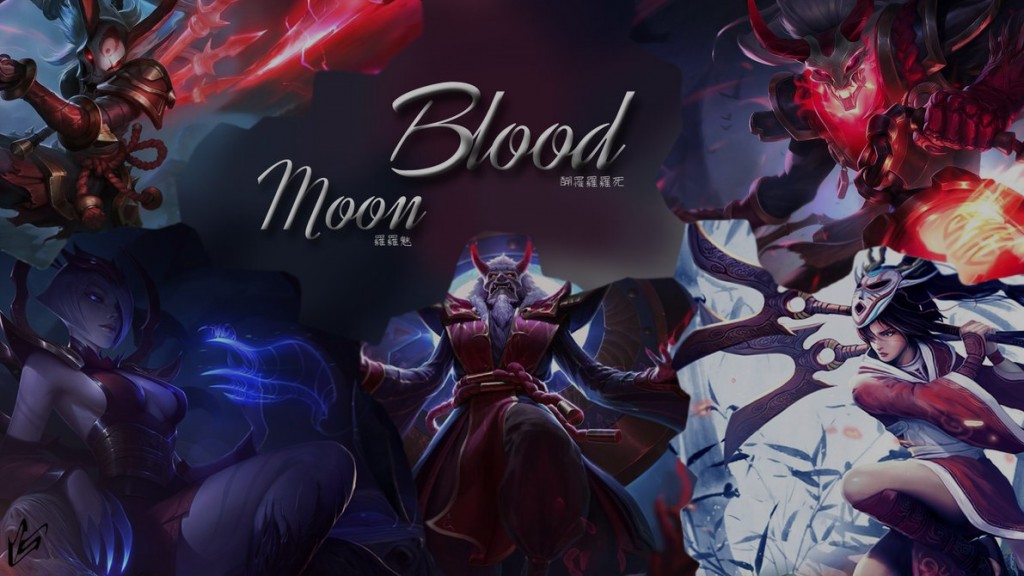 Players were pleased with this event, and Riots decided to celebrate Blood Moon Festival every year.

OVERVIEW OF ALL BLOOD MOON SKINS THROUGH THE YEARS

With every new event more and more champions join the Cult of the Blood Moon, and they received a new, dedicated to this festival skin.

So let’s look at the most interesting part of this article!

In 2011 Riots celebrate their first Blood Moon event, and they choose Akali and Shen be the first chosen one’s champions of the Blood Moon. Also the reference their performance as Reina (Akali) and Haunting spirit (Shen).

Look’s like that Akali playing role of an ancient warrior, which resembles a Noh theatre play. This was not the greatest skin of the Blood Moon, but they were first! The did not receive any new particles, animations or sound effects. Only new Model for Akali and her kamas. Right now players are begging Riots to rework those skins, because right now they are overpriced, compared to the new skins.

You can get Blood Moon Akali for LoL for 975 RP in Riot shop.

As Blood Moon Akali, Blood Moon Shen did not get anything, despite new model, that changes Shen model and his ninjatos. And another blood moon champion skin that needed to be reworked, because Riot made a giant step in the skin creating art, and asking 975 RP for THIS is really something dirty.

You can get Blood Moon Shen Skin for LoL for 975 RP in Riot shop.

That was a long, 3 years long, break but now Blood Moon is back. This time only Kalista joined the Cultist’s side.

“Kalista is known all across Runeterra… but different cultures may tell her story differently, as well as have a different idea of how she looks, since most of them – the lucky ones, anyway – have likely never actually seen her.”

This Blood Moon skin was made nearly perfect, with new sound effects, new animations for recall and for her death, new particles for all her actions, from auto attacks to recall, and of course new, high detailed model with glowing effects on it.

You can get Blood Moon Kalista Skin for LoL for 975 RP in Riot shop.

Just look at these fellows, 3 new skins! Really good news from Riot. So let’s look at them.

This Blood Moon Thresh skin look really interesting, as an Ionian dark spirit. He received a glow, new model for his scythe and lantern. And a standart pack of new animations, particles and everything else.

You can get Blood Moon Thresh Skin for LoL for 975 RP in Riot shop.

This spider queen just can not ignore this event. Elise guide her’s victims right into a web. Really great skin, it change both of her’s forms and add new sound effects. Her spider form look like a Shinto Jorogumo, that is a japanese spider demon, that can took form of a woman.

You can get Blood Moon Elise Skin for LoL for 975 RP in Riot shop.

This time Zilean take a form of the mystical timekeeper, that dressed in traditional Japanese costume. As other Blood moon skins, this one received new recall animation, new model with a kabuki mask, and new visual and sound effects.

You can get Blood Moon Zilean Skin for LoL for 975 RP in Riot shop.

Tonight Yasuo will join the Hunt. And Kennen too. Really strange choose, because according to the LoL lore Yasuo was unfairly accused of murder, and he was trying to find a murderer and return his good name.

Story with a Kennen is even more strange, in LoL lore he was Kinkou’s warrior that watch over the balance. So what happened with them, how they joined Blood Moon cult? Well skins are awesome, so why did i ever bother about lore?

You can buy Blood Moon Yasuo Skin for LoL for 975 RP in Riot shop. 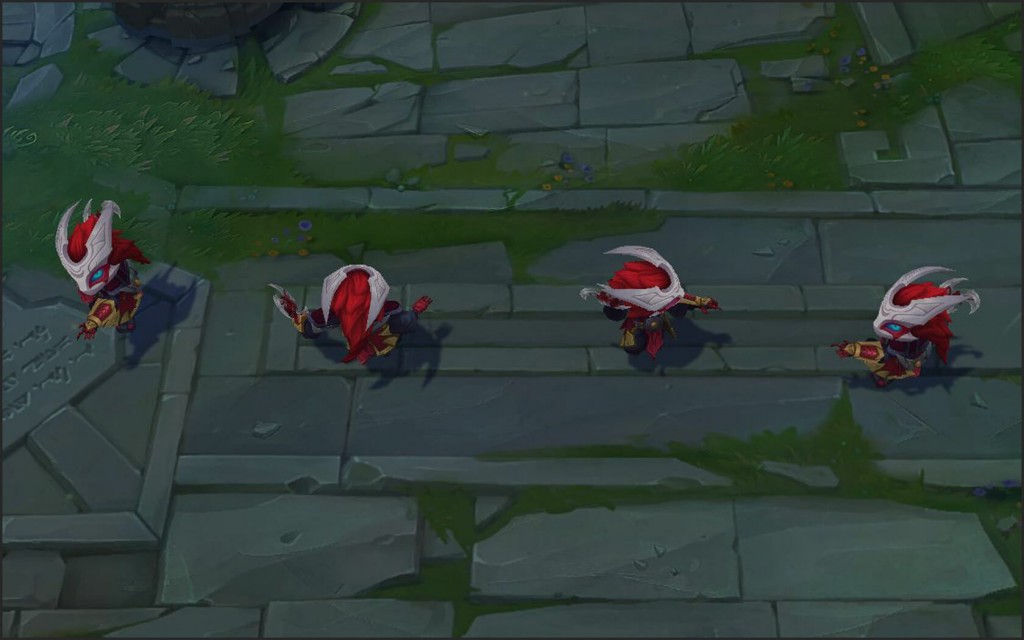 This was a real git to all Kennen players, because the last skin for him was released 3 years ago. And this little fella receive a standart kit of Riot skins: New model, particles for his abilities, new animations. Standard? Looks like Riot spoiled us, in 2011 we were pleased with skin that change only model of the champion…

You can buy Blood Moon Kennen Skin for LoL for 975 RP in Riot shop.

So here we are, this years Blood Moon Festival was great, and gifted 4 new Blood Moon Themed skins for us. This time Riot added a small description to each of them.

The moon shines most vividly as the Blood Priestess approaches. Scarlet rays from the night sky beam down on her victims, and the lunar assassin is never far behind. Her ritual slaughter is done swiftly, her arcing blade glinting in the dark moonlight.

Here she is, we all were confused why Diana, priestess of the MOON do not changed her clothes yet? After all these years we finally met a priestess of the Blood Moon Diana. She get new model with a traditional to this event mask, new recall animations and all-new sound effects!

You can buy Blood Moon Diana Skin for LoL for 1350 RP in Riot shop.

The Blood Calligrapher’s masterpieces are as beautiful as they are horrific. For him, each victim represents a new inkwell, and his canvas will be as broad as that ink will allow. The sanguine marks on the ground signify the Cult’s power and deepen the artist’s connection to the spirit world.

Well, i have no questions how that psycho joined the Blood Moon Cult, so let’s go straight to the skin overview! His new ultimate sound effect is just awesome, and this is not the last thing in Blood Moon Jhin skin. All his outfit is perfect, from new animations, to this creepy mask. Totally worth all riot points that he cost.

You can buy Blood Moon Jhin Skin for LoL for 1350 RP in Riot shop.

As precise as he is patient, the Blade Demon is thought to be the result of a broken symmetry between the blood moon and the earth, sent down from the deathly sky itself to collect its due. Silhouetted against the crimson moon, he descends on his victims from the canopy above.

Oh, all these Talon players pay every evening for this skin. It’s been long 5 years since the last Talon skin, and they made this masterpiece. He get one of the best Blood moon skin in 2017 year. Just look at all those features in the video above. New sound and visuals effects, new model and animations aswell!

You can buy Blood Moon Talon Skin for LoL for 1350 RP in Riot shop.

Few agree on the true nature of the Trickster Demon, who deals death from his deck of afflictions. Whether he is a demon from the spirit world or a mortal in a mask, quiet whispers spread conflicting rumors of his whereabouts. The truth belongs only to him—and the spirits trapped in his cards.

And another great skin. In this year Riot did a really great job, and every Blood Moon skin became a real piece of art. Blood Moon Twisted Fate get a traditional mask, that hide his face, traditional to blood moon event new recall animation, sound effects and completely new model.

You can buy Blood Moon Twisted Fate Skin for LoL for 1350 RP in Riot shop.

And that’s what we all loved in Riot Games so much – their unique visual style. Their splash arts to all the new skins in most cases are just magnificent, and you want to put them as a wallpaper on the desktop immediately. Just look at these Blood Moon Splash Arts: 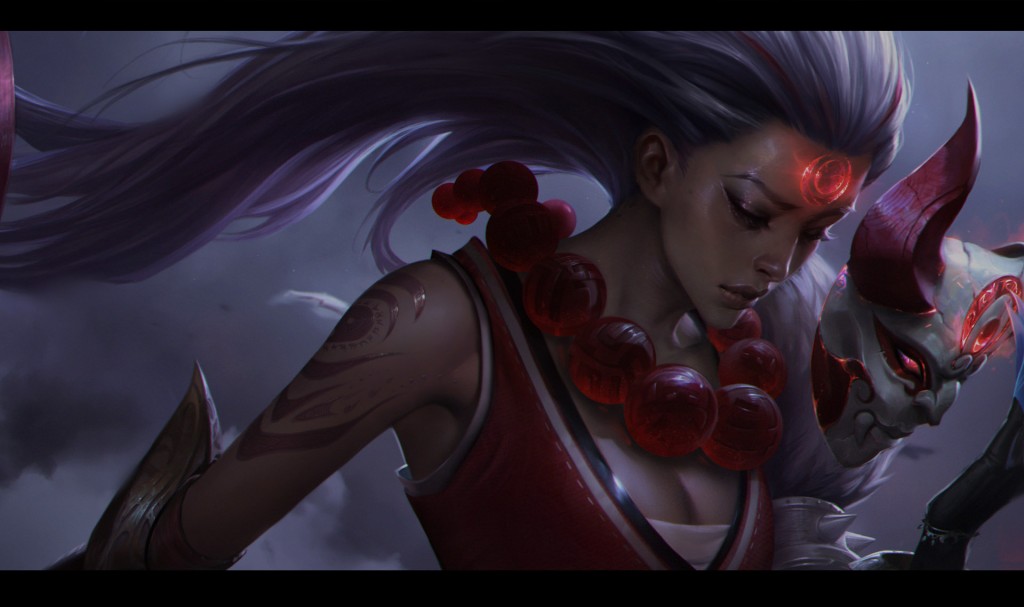 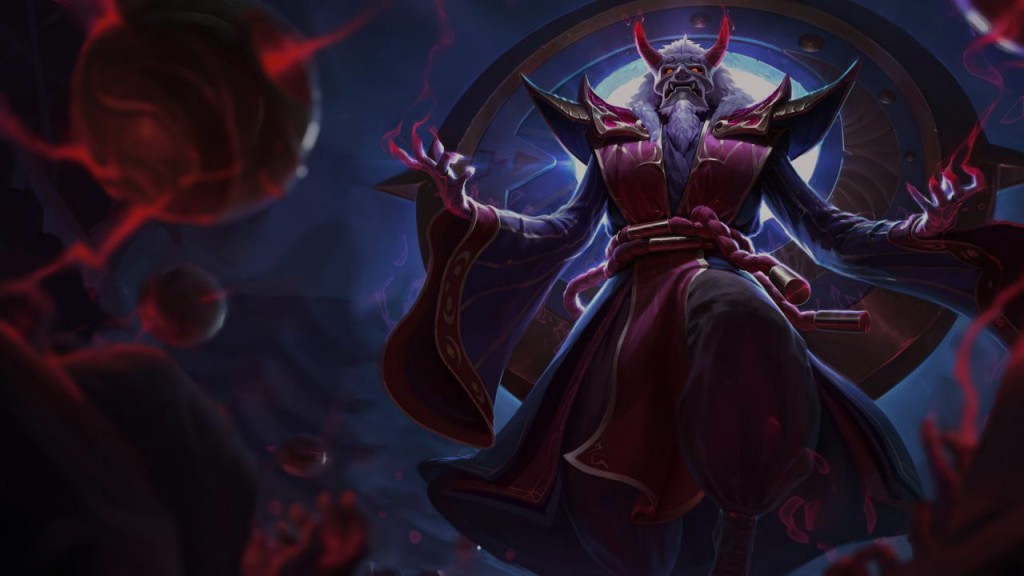 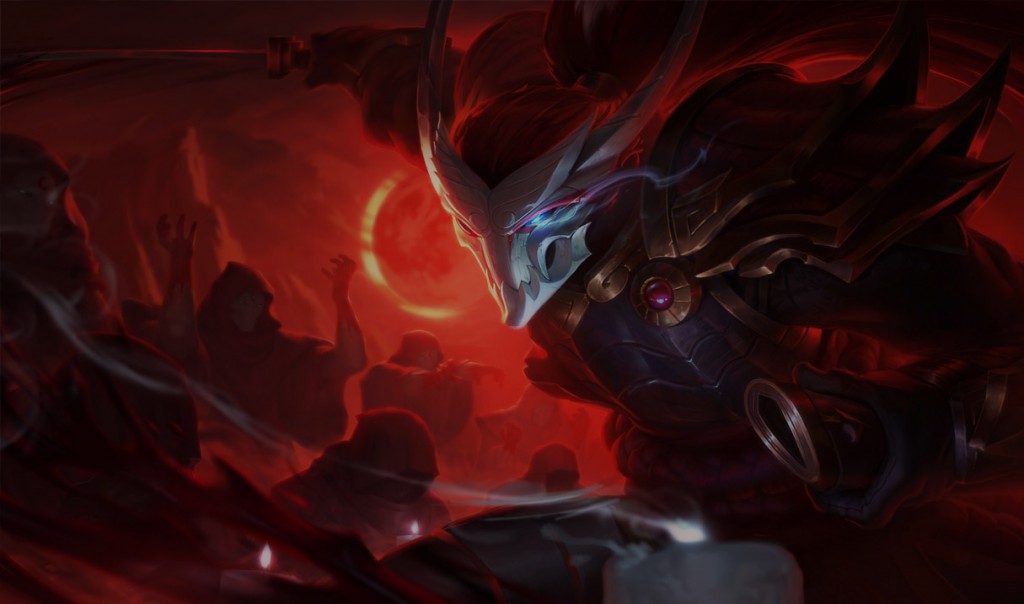 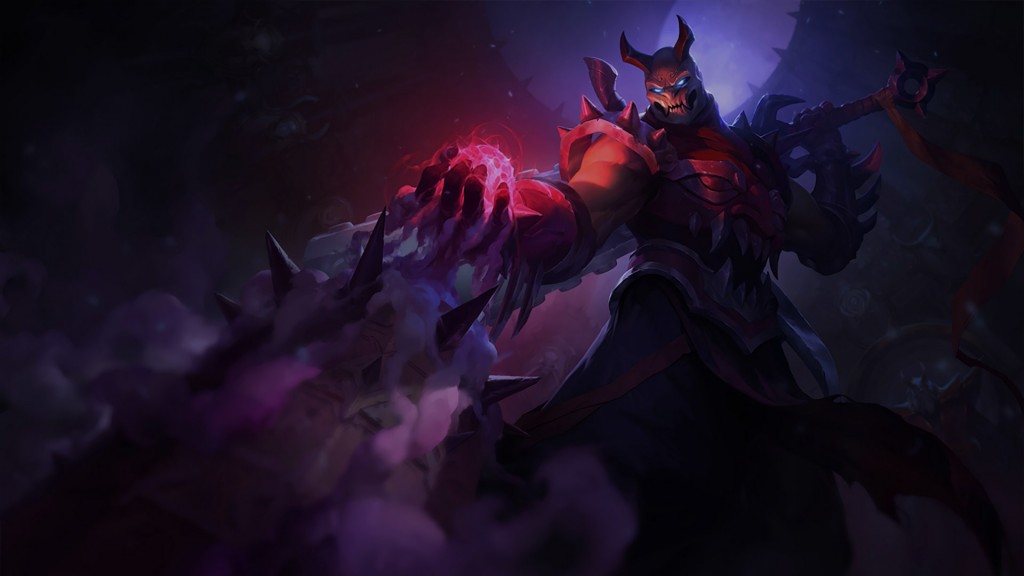 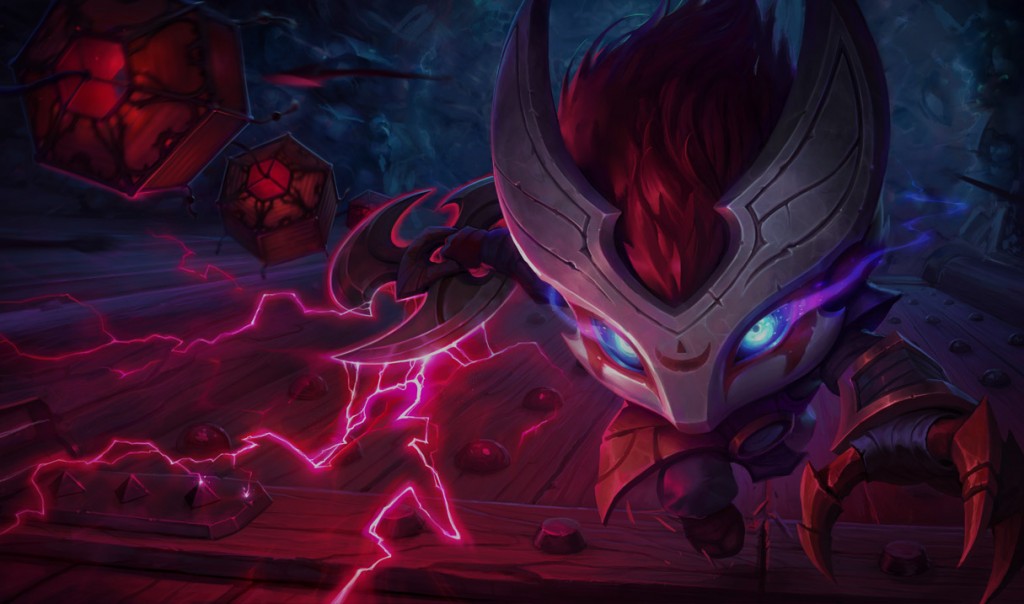 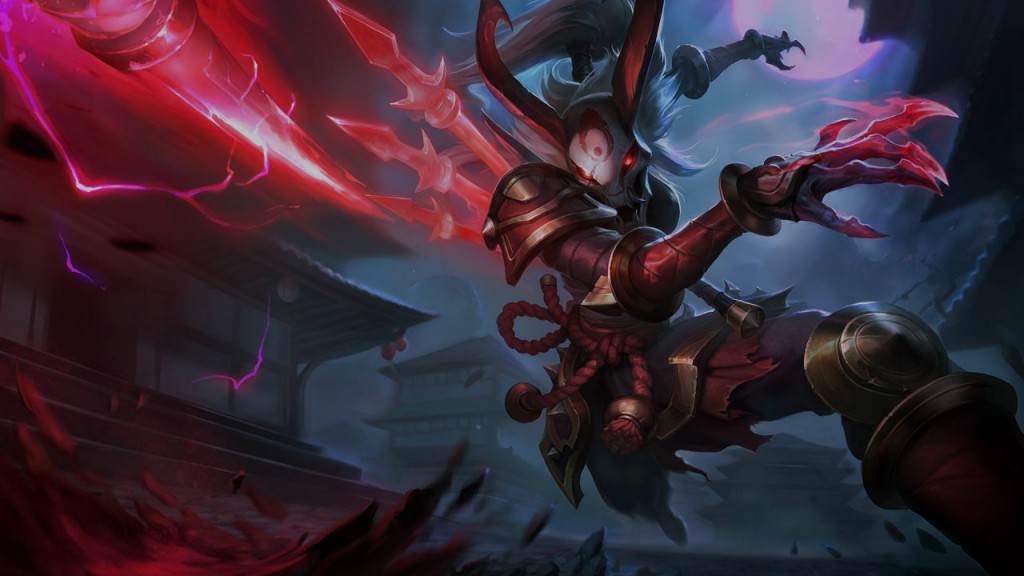 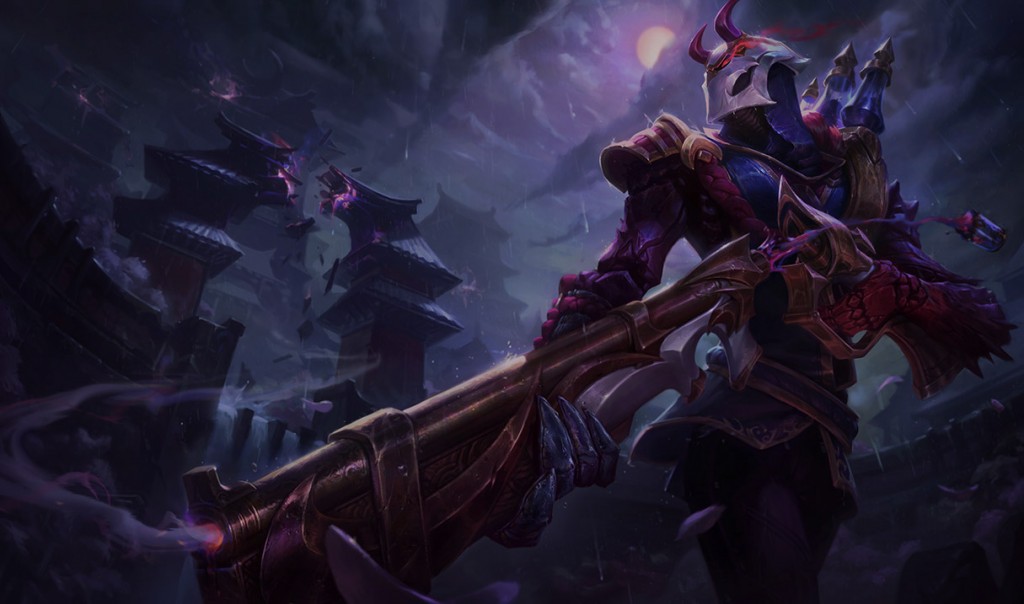 Check our other articles about LoL: