New Runes in the LoL

The “runes and masteries” system in LoL was created to create a flexible environment, where all players could find the way, they want to play. They continuously upgraded that system, but the game was developing too fast and Riot Games decided that in 2018 Season LoL need something fresh, unique and new. And now we can see the results of their work – Runes Reforged.

Below you will see the most interesting data about lol new runes, like new runes, best rune builds, what are rune paths and etc.

Right after the LoL Season 7, developers decided that “runes and masteries” system is too complicated, and create a completely new system, that was merged from the previous masteries and runes. This initiative was called “Runes Reforged“. Firstly new LoL runes were added in the Pre-Season 2018 and they contain the best from the ancestors. 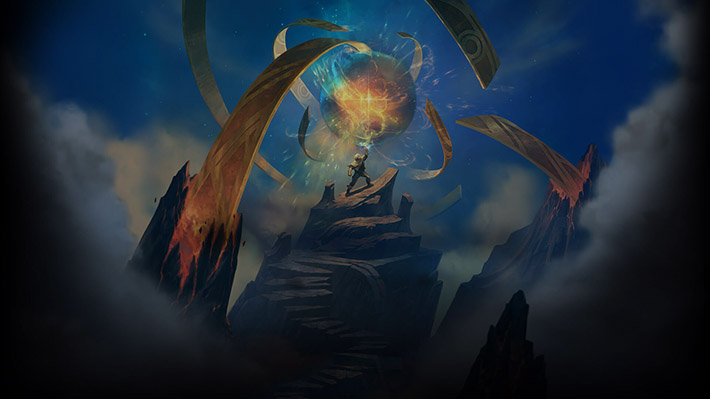 Players now can choose two of the five available paths, but only one path can be used as a primary and contain 4 runes, a secondary path will be able to hold only two runes. Runes Reforged are very similar to the previous Mastery Tree. Each Rune Path is created as a Mastery tree, where you have tiers of talents that were replaced by special runes.

Runes Reforge is very similar to the Masteries: Each Path has 4 Tiers, with 3 runes in each tier where you could choose only 1 rune per tier. The only one Tier that I want to highlight is a Keystone Runes. All Keystone Runes greatly affect the core gameplay of the champion, and the whole idea was borrowed from the Keystone Masteries.

The second major feature of the Runes Reforged is that all bonus AD / bonus AP runes are now adaptive, and that’s mean that you will not spend any time while you switch all AP runes on AD runes and vice versa.

The new runes in LoL are absolutely free, and all new players will immediately receive 5 Preset Rune Pages. If a player had any rune pages in the previous system they will be transferred across to the new system, with a small compensation.

All new players will receive seven basic rune pages – 5 Preset Pages that cannot be edited, and 2 slots for personalized pages. This was created to welcome newcomers with the new rune system in the LoL, but as soon as you promoted your account to the 11 level, you can purchase additional Rune Pages. 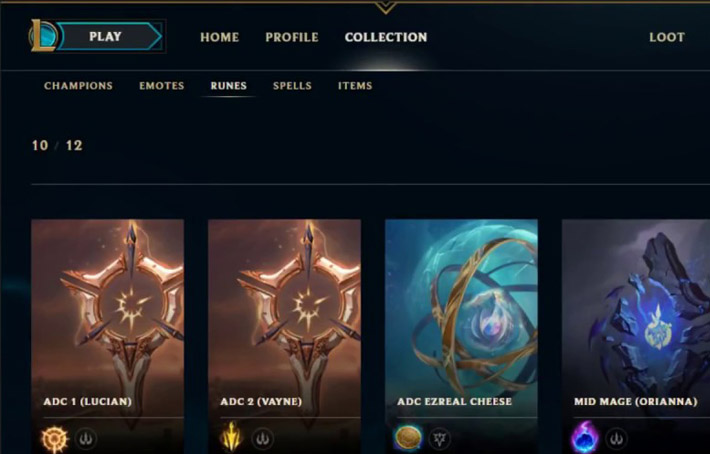 For all old players who bought a lot of expensive runes, or rune pages will receive a solid compensation.

If player purchased tier-3 marks, glyphs or seals before LoL Season 2017, then he will receive 100 Blue Essence for each of them. And full refund for purchases that were executed during Season 2017, up to August 31.

This situation is similar to the previous one. If player obtained runes before Season 2017, then he will receive 300 Blue essence for each Quint. All other players, who buy Quints during Season 2017, will receive a full refund compensation.

As I mentioned before, new rune system is very similar to the old masteries. And as in the old system, you may choose two Paths out of Five:

All Marksman champions are well known more as ADC and they need the ability to deal sustained damage during the teamfight, and the Precision Path can offer many interesting runes that will definitely interest you.

This is accumulating runes, effect of which increased during the game. Champions gain the Legend stack for every 20 points:

Domination runes are created for such champions that able to perform a kill in a few seconds. If you seek a rune path for a burst champion then Domination Path is your choice.

These runes have a special Bounty Hunter stacks, which can be earned for takedown unique enemy champions.

As you can recognize from the Path’s name, this path was created mostly for mages. Mid lane players will surely choose this path for all champions that prefer Ability Damage.

If you want to stay alive in a teamfights or be sure that your allies will stay alive, then you probably want to choose the Resolve Path. Special runes that are focused on resistance and health increasing.

At the first glance, this Path was designed as a secondary, but at a closer look, you can see all the advantages of these runes. This Rune Path can be used by anyone if you brave enough.

In the Runes Reforged we have a great variety of the builds, but which of them is the most effective? This time Riot Games created the pretty unique system with more than once perfect build, where you should choose talents based on a specific situation. 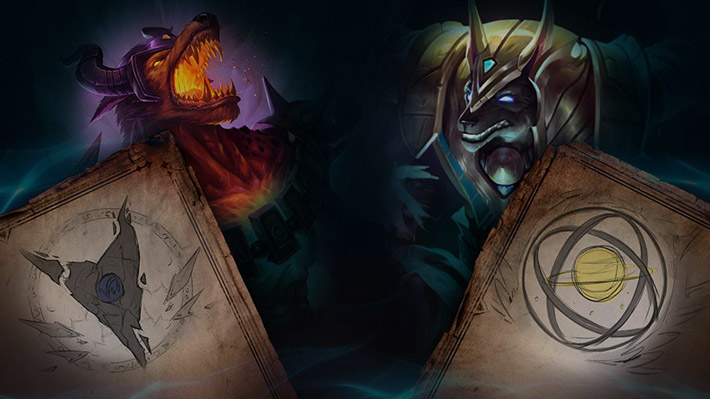 I want to remind that this is a standardized guide, and for your champion, runes can drastically change.

The best Rune Path for the mid lane is Sorcery because most of the AP champions are incredibly strong in the Middle lane. So I want to highlight the most pickable Rune Paths and Runes for AP champions.

The most popular Rune Paths for the AP champions are Sorcery (Primary) and Domination / Inspiration (Secondary). 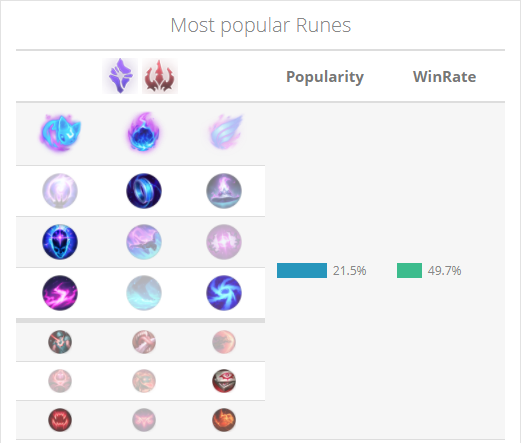 As I said before, the best Primary for mid lane champions path is the Sorcery, because it proposes many interesting runes that can increase your Ability Power.

The two best secondary Paths are Domination and Inspiration. Each of them has their cons and pros, but which to choose is up for you.

As ADC you want to continuously deal a sustained damage that sooner or later will destroy the whole enemy team. The Precision Rune Path seems like an ideal primary path, but what about secondary? The most popular secondary rune path for AD Carry is Domination, but Sorcery is fine too, and due to the League of Graphs, the second option has even higher winrate, but almost twice more unpopular. 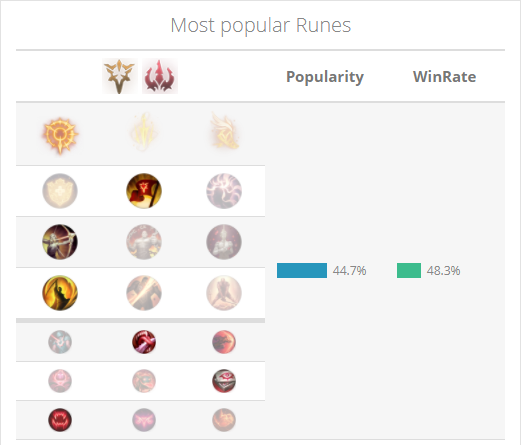 Improved attacks and sustained damage.  Looks exactly what we need as ADC, so I suppose that we will take the Precision Rune Path. There is only one best Rune build for ADC champions, and below I’ll explain why it is so.

According to the data we have, the best domination rune build for the AD Carry champions is next:

But some players prefer Sorcery as a secondary rune path for AD Carry:

As a tank, you want to absorb as many damage as it possible, so you would like to have a Resolve runes. Resolve Path is the only path that provides survivability, so any tanky champions should choose it. 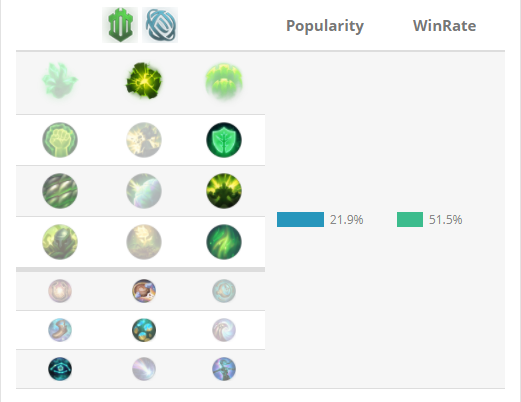 Resolve Rune Path is concentrated around resistances, health, and healing, so it is the best choice for all Tanks.

As a tank you will not see a lot of gold in your pockets, so you would like the free stuff, that Inspiration path can propose.

Aggressive support prefers sorcery rune path with the secondary resolve, and I personally prefer aggressive supports over healers. But Here I will show both support builds. We will start with the Healers. 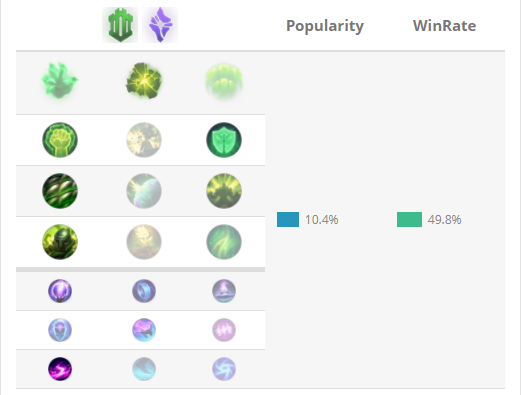 Most of the support champions prefer Resolve Rune path as a Primary, but the secondary one is Sorcery. All healing supports have some problems with a mana management, so Sorcery Rune path can partially solve this problem.

Here we can see a pretty interesting situation. All Secondary Sorcery runes have approximately equal pick and win rates so choose by yourself. But the one and only must pick Sorcery rune is:

If you play as a roamer whose goal is to run all across the map and help at other lanes, then the Sorcery + Resolve is the best bundle for you. You may look at the Sorcery part upper for recommendations, here I will highlight only secondary – Resolve runes:

Right now the best jungler is aggressive jungler, and that’s why the most junglers chooses the Domination Rune Path as a Primary. Burst damage is now in honor in jungler’s ranks and they need all tools to boost this damage. 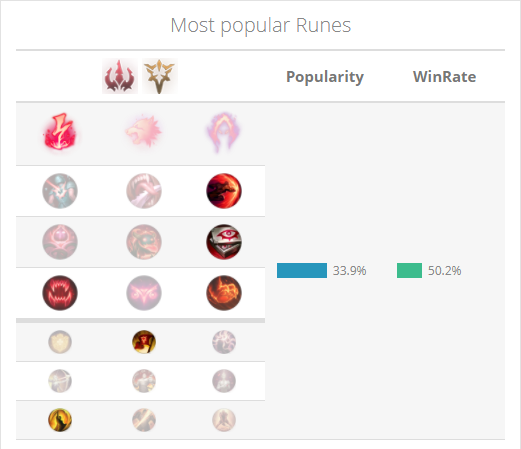 As I mentioned before Domination path is the best for junglers because it contains the greatest burst runes, but which of them are the most popular right now?

This is a pretty complicated thing. On one hand – the best secondary rune path for jungler is Precision because it rewards you with the successful kills (Triumph rune) and a strong execute phase on your enemies (Coup de Grace rune).

But on the other hand – the best secondary rune path for jungler is Sorcery because it has runes that greatly reduces CD on Ultimate ability (The Ultimate Hat rune), gives you a free AP/AD and movement speed (Celerity rune), and a make your burst a bit stronger (Scorch rune).

The choice is up to you, and both of these paths (Precision vs. Sorcery) approximately equal.

Check other posts that were written thanks to Boosteria – Elo boosting service: