Proper warding skills is something what each player should seek to acquire.
Our map control guide should be a good help on this way.

Warding process in order to gain map control is one of the most important aspects of LoL. It allows you to position yourself better than enemies thus winning the fights. In this guide we will show you how to properly put the wards on Summoner’s Rift depending on your position, role and stage of the game.

In the first part of the game when team is divided by lanes, everyone is for himself. Thus you have to ward entrances to your lane in order to evade enemy jungler ganks. Let’s consider how to control map in LoL by each lane separately.

Top lane is the most vulnerable lane because it’s long as bottom lane but there is no support who would put wards for you. Also it’s far from the Dragon’s Pit therefore most events there occur without the participation of the rest of the team. Because of that there is some kind of isolation which can easily lead to snowball of your opponent. That’s why correct warding to prevent enemy ganks is so important on the top lane.

The are two main entrances to the top lane. If your team respawned on the bottom side then ward tribush else ward lane bush. If you are dominating your lane (despite respawn side) then you can put a

vision ward in the lane bush. If it stays at least 4 minutes it would be worth the gold price, in addition it won’t allow an enemy to keep any wards there. So you need to worry only about a lane gank. To evade such gank is harder because it’s usually unexpected and is used really rare in in the solo queue. However some times you can understand it by “tells” of your lane foe. If an enemy tryed to keep you on the distance before and then suddenly goes in – it’s very likely that there is a jungler nearby.

Put the first ward from trinket at 3-30 since usually nearly this time junglers are ready to gank top.

Proper warding on the mid lane can win you a game because wards there provide vision of ways to each lane, including mid lane itself. There are two nice spots for

Use ward spot on the left image if your team respawned at the blue / bottom side, for the red side use spot on the right image

On mid lane your aim is to control river ways to other lanes thus preventing your allies from being ganked through these ways. When you are playing on the middle lane, we recommend you to buy one or two wards each time you recall. This is worth spending because you would control all central jungle routes and it affects everyone in your team. The two following ward spots cover almost all ways through which enemy jungler usually ganks the mid lane and provide necessary vision for other sides:

Support has the primary duty to ward the map in order to provide a vision to his team. When the lane phase begins you have to use your trinket to ward lane bush to evade free poke to you and your AD carry from an enemy support. Later your aim is to win “ward war” with your rival from the opposite team.

When you put a

vision ward in the tribush thereby you open a way for your jungler to gank your enemies from behind. It’s much easier to control this bush if you are playing in the blue team. However you can put a

vision ward there when you playing on the red side if you are dominating the lane or you see that your jungler is nearby to provoke a fight with your foes.

If you are behind (link to our guide: what to do when you are behind, will be opened in a new tab) and your lane is constantly pushed then victory in the “ward war” is unlikely. Thus you should ward a river bush to have at least vision of a half of possible ways to your lane.

Except positional advantage on the Dragon’s Pit area about which we will tell you later, there is another advantage for the blue side on the bottom lane since it’s much easier to control tribush to provide the way for a gank to an allied jungler when you are playing on the blue side.

Lane ganks on the bottom lane are very effective and popular, especially with champions who have crowd control abilities with a long range engage like

Nautilus. There are two ways to protect yourself from that. The first one which is less effective but it also provides vision in the lane bushes and allows your top laner to teleport behind your enemies:

The second method is not commonly used but would warn you about upcoming jungler much earlier. If you have an opportunity to put a ward at these spots it would help you a lot. Also these wards spoil enemy jungler at Gromp or Golems camps providing additional help for your team.

Warding the Dragon since early game is the main responsibility of support. This is especially true because there are many junglers who able to get this important objective in solo. Also a ward on Dragon’s Pit is more useful than in a river bush because you would see upcoming threat earlier. You can save a

vision ward for the moment when your team would gather to slain the Dragon.

As attack damage carry you can use any of listed ward spots to help your support except those which are really far from the lane. Use your trinket to put a ward when you come to lane, in the future you can buy one ward until your support gets

As jungler you have to fill in the empty spots on the map we previously mentioned for other roles. Like mid laner jungler should buy one or two wards with each recall because it’s the only full roaming role. Another reason is that jungler has a lot of opportunities to put wards including spots in the depths of the enemy jungle. Also it will allow you to track an enemy jungler to counter-gank which is the most attractive possibility when you are playing

If you planning to invade enemy jungler to catch him during monster farm then these ward spots will help you a lot (first one for the blue side, second one for the red side). Also you may ward buff camps themselves.

If you know that your opponent is going to take red buff you may ward it beforehand and wait in the next bush. This way an enemy won’t spoil you even if he check red buff bush before start to farm bramblebeck.

Invading blue buff is a little harder but there is a nice chance to gank mid laner while enemy jungler transfers blue buff to him. You have to ask your ally from the mid lane to help you in this process. Both of you have a nice chance to catch and burst down foe. It’s rare possibility to ward blue buff bush therefore consider just warding blue buff’s respawn point.

In this part of LoL warding guide we will not distribute ward spots by roles since it’s supposed that at this stage of the game team most time moves together. Everyone should use their trinkets and protect support when he is trying to ward objectives since support can be easily caught off guard and bursted down. This, in turn, can lead to free objectives for an enemy while they are in the majority and the subsequent defeat. Having a vision of objectives is important during games if you want to get for your account a ranked boost.

These ward locations will allow you to track any movements of enemies towards the dragon. Also you may add a ward to the river bush near bottom lane if you see that enemy bottom lane players are still there. 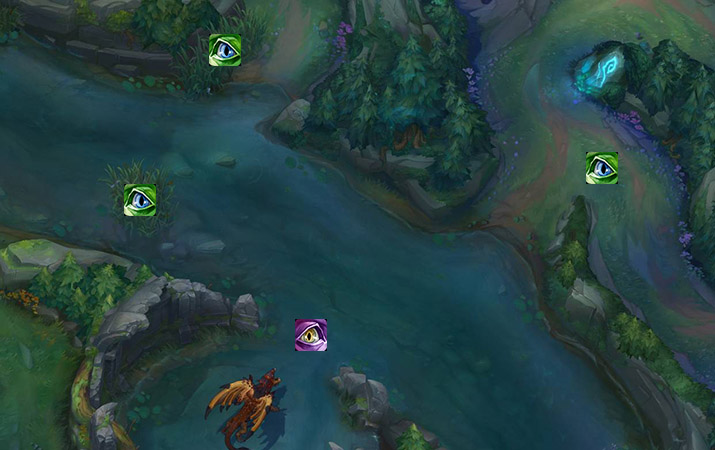 Comparing the two pictures you can see why red side has less winrate than blue side. Dragon’s Pit is the most popular place for team fights and blue side feel much more comfortable there. The red side has advantage on the Baron’s Pit but fights there are much more rare.

Always pull out the Dragon in order to make harder possible steal attempts from an enemy jungler who able to teleport into Dragon’s Pit from behind and smite the Dragon. Also it’s better to put a ward behind Dragon’s Pit for the same reasons. Ward in river bush is optional but it can be very helpful in tracking enemies who out of range of ward in the tribush. 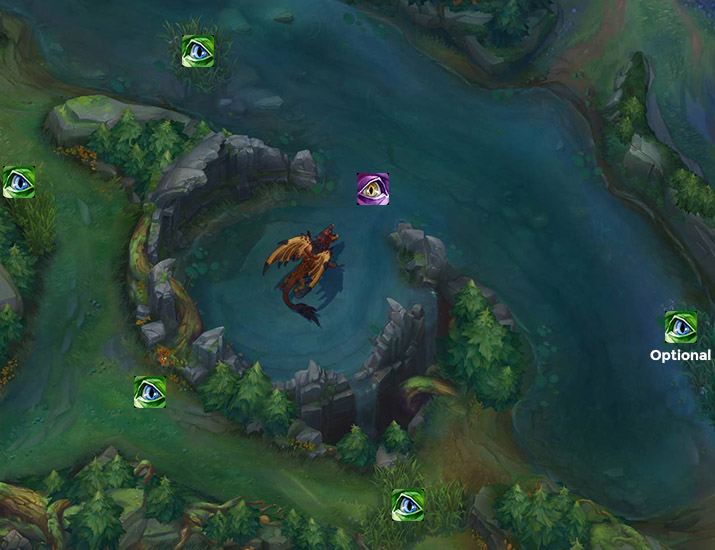 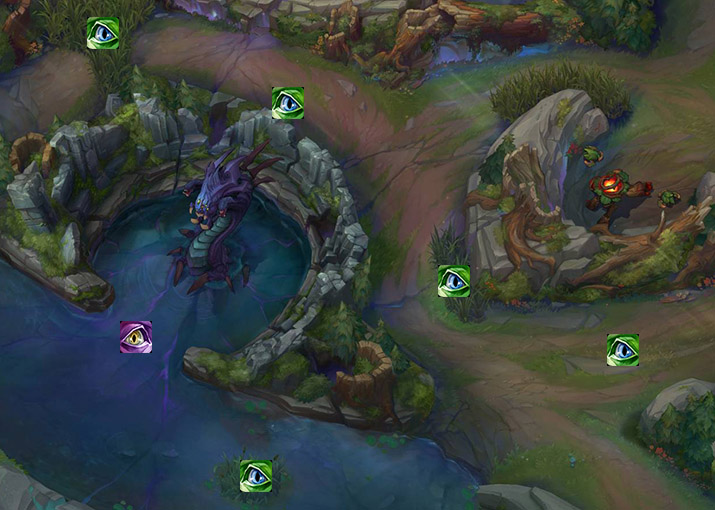 There are only three sight wards but they are all important. If it’s possible you may ward distant bushes nearly mid lane and the further one in the enemy jungle. 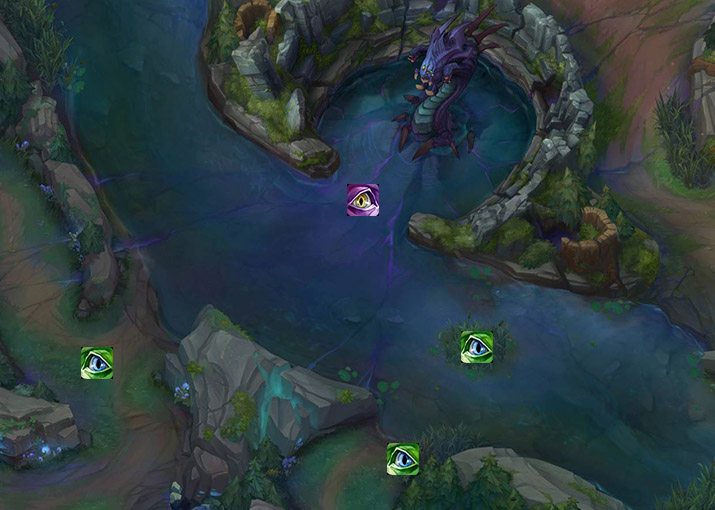 No matter if you are sieging or being sieged, you need a vision to outplay your foes. When one team is sieging a turret while another one is trying to defend it there are usually lot’s of poke. In order to evade poke and hit foes back you may want to put a few wards. Also it helps when you are defending to survive enemy engage on you since gives your time fall back and regroup for the battle.

While sieging inner mid lane turret you need to control side places in order to prevent counter-engage and an attempt of enemies to go on the flank. Also it helps to predict enemy poke and poke back. 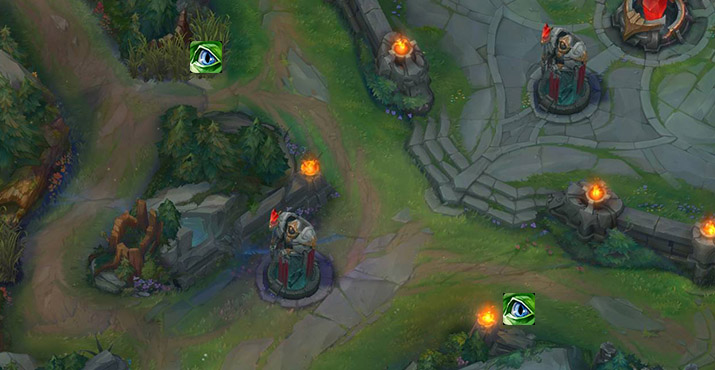 These wards will allow to predict enemy poke and avoid it by providing full vision of the enemy team. Also there is always a chance to catch someone off guard nearly the wall. 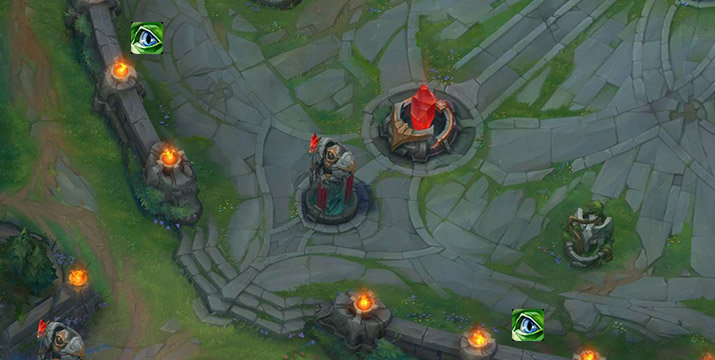 WARDING WHEN YOU ARE SIEGIED AT INNER MID LANE

Nidalee or long range engages by such champions as 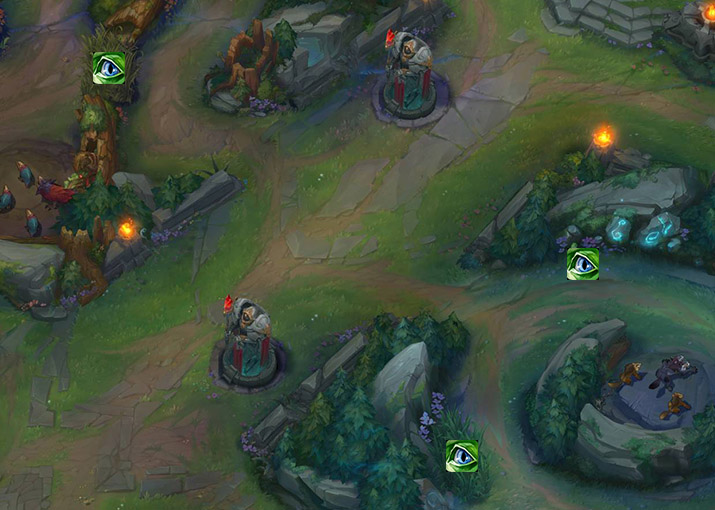 WARDING WHEN YOU ARE SIEGIED AT INHIBITOR

These ward spots can help you to catch someone who is running off guard close to a wall and hit back your enemies when they poke. 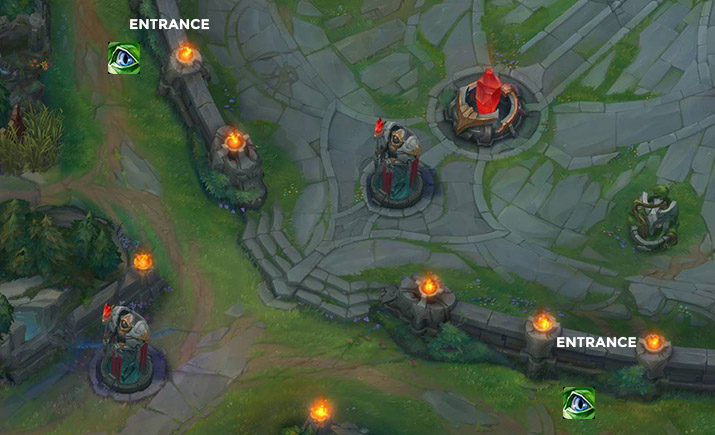 Map control is one of the most important aspects of LoL thus you should improve your warding skills in order to increase your winrate.