Recently, Riot Games decided to add several eastern skins and named them as Immortal Journey. In total, three skins have been released, but I’m sure that in the future their ranks will be replenished (if the public will love them, in which I have no doubts). Only three mystical swords were uncovered – Eternal Sword, Soaring Sword, and Sacred Sword, and the next champions obtain these Immortal Journey champion skins:

For many centuries, the eternal defenders guarding the thin veil separating our tranquil world from the raging chaos from within. There was always a guardian of the Sacred Sword, a sword capable of opening the gates to another world, where one can find a great power, immortality and the death of all that exists. In our time, this honor was given to the young warrior Janna. She mastered the Sacred Sword, and obtain enough power to cope with all the enemies that threaten to break the thin line between ours and another’s world. It is not known who was the past guardian of Sacred Sword because Janna found it in a mountain lake on the edge of the world for a very, very long time ago. It is unimportant how, when or why she took this burden, but the only thing that is important – now the vail is under protection and she will destroy any threat without a drop of regret.

Eternal Sword Yi is a mysterious warrior who spent almost his entire life searching for the mysterious Sacred Sword, in the hopes of revealing all its secrets. The very winds of fate accompany him on the way, but the very purpose of his journey remains an unsolved mystery.

Soaring Sword Fiora is a deadly fencer who follows the Eternal Sword Yi in shadows, hoping that he will lead her to the cherished goal. She is incredibly fast and talented, and her ambitions are driving her desires. Fiora wants to take all the power of Sacred Blade and is sure that even Eternal Sword Yi cannot stop her.

WHERE THE HEAVENS TOUCH THE EARTH

The snow howls outside the window
As we sit at the foot of our Master.
A blue frost reflected in her eyes,
Silvered light caresses her hair.

Winter days freeze the mountain,
Yet the melody of Spring remains.
The heartwood will burn to cinders
While the timeless wind beckons.

Our Master sets a journey before us,
To seek immortality’s secrets.
For where the heavens touch the earth,
Revelation will surely bloom.

For where the earth greets the sky,
She guards a blade of Myth.
A scarlet shadow reflected in the lotus pond,
And gossamer sleeves trail mystery through the wind.

Metal, forged from stone hard and ancient,
A thirsty blade quenched in a river of stars.
Possession casts all sense into oblivion
As the eight mortal sufferings are blown away.

The greenwood grows fiercely
And the wild flame blossoms, eager to meet fate.
Riled and unpredictable, blades flash like dragons.
Her elegant hand teases their destiny.

Seven eyes gaze from an immortal plane,
With eight facets of a heart clear and crystalline.
Is there a choice of perfection;
A space, between the fleeting dew and immortality?

The Immortal Journey line of skins can offer a bunch of casual summoner icons, that represents each of the new three champion skins, and one quite unique and beautiful transcendent icon. 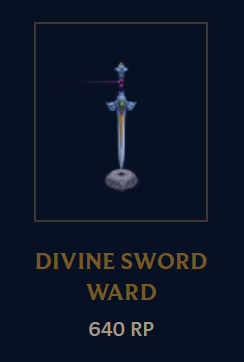 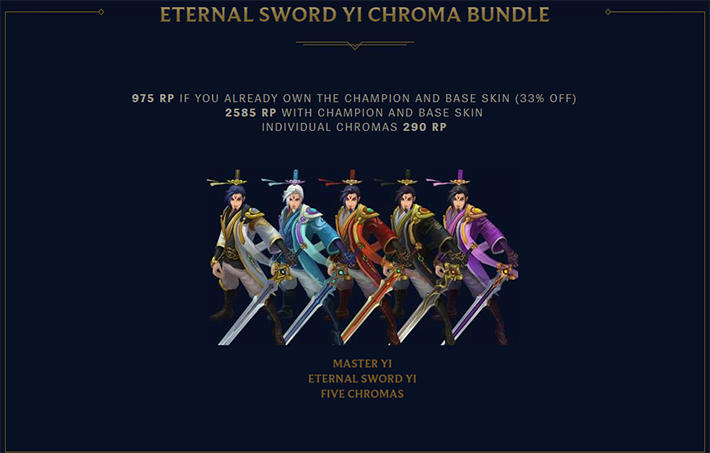 There is one last thing that I want to remind to all of you – these skins are not united under the same name, like the others (like Academy, Project, etc), and I want to clarify the next thing: 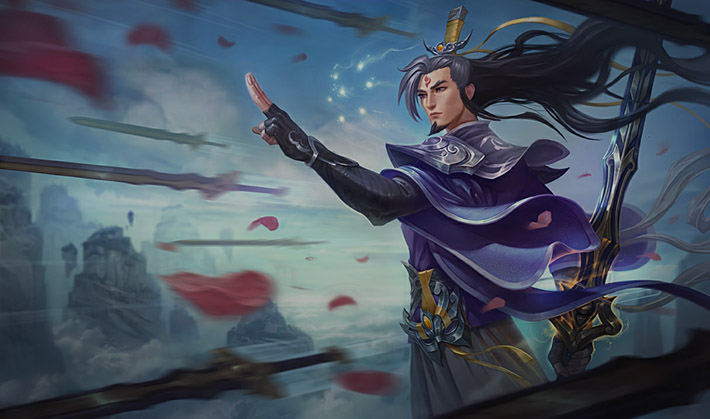 Finally, we will see our Wuju master without a mask. And no doubt such a concept of the champion undoubtedly goes to Eternal Sword Yi, the image of a mystic swordsman, no high technologies, only his own blade-skills of a swordsman and little mysterious Wuju techniques. The appearance of the champion has significantly changed, added a lot of animated clothing details and East Asian style. On the one hand, it’s a little annoying that the developers have not made any surprise with his face, but on the other – the ordinary human face, it’s not so bad. Very beautiful and unique looks new animated strips of fabric, and it is really refreshing the champion himself. The eternal sword of Eternal Sword Yi is beautifully decorated and conveys the Asian style as well as the new costume.

New animations in this skin include auto attacks, double-strike, Highlander, and recall. Auto Attacks of Master Yi now leave a barely visible golden trail, and the new animation of Meditation is the most beautiful and interesting ability of this champion. Recall’s new animation is really strange. It’s just not clear why he wears his mask and why he flies on a sword as if it is a hoverboard? Unfortunately, the visual effects are quite sad, the improvement of the particle effects did not affect the overall feeling of the champion.

Let’s go to the sound effects. The developers added sounds like the clang of metal and mystical noises for the Eternal Sword Yi’s abilities. Autoattacks sound like in the classic skin, but the Alpha Strike now sounds like a dull metal clang, and the last attack ends with an unexpectedly pleasant chiming bell. In general, the sounds are pleasant, but I personally waited for some new replicas or new voice-overs. It seems to me that the standard voice is not suitable for this Eastern Blademaster. 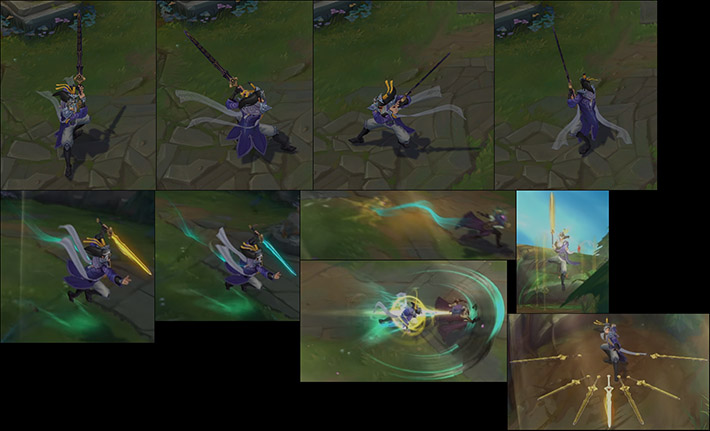 Eternal Sword Yi is a fairly unique new skin for this champion which offers a lot of interesting visual and sound solutions. Although the visual effects remained extremely close to the classical ones, still all the other advantages prevail and I cannot hate this new skin from the Immortal Journey skin series. I strongly recommend Eternal Sword Yi for everyone who loves the East Asian culture. Also do not forget about Eternal Sword Yi Chromas, you could always choose the color you like more.

You can buy Eternal Sword Yi skin for 1350 RP in the LoL in-game store. Quite a strange developer’s decision – to use the mage for the Immortal Journey skins, a series of skins about the various swordsmen. And because of this, I think the Sacred Sword Janna is the weakest of the Trinity. Developers must put incredible efforts to make us believe that the maiden of the winds could be instantly turned into the keeper of the most powerful sword from Immortal Journey. I think that such a concept does not fit this champion, but let’s see what the Riot Games have prepared for us. Appearance is very good, Sacred Sword Janna wears a loose dress with long sleeves and is decorated with a magnificent tiara worn over her, dyed black, hairs and the staff was replaced by a very strange two-handed sword. The blade of the sword is visible only in one single case – when Janna using recall. Zephyr, the mighty air elemental, was replaced by Koi fish with a long caudal fin and a rather pleasant coloring and animations.

Time of visual effects! Since the main theme of this champion was always the air, the developers decided not to depart from the original canons. All the abilities using wind as the main element, but because of the transformation of Zephyr into a Koi fish all the abilities now have a weak water shade. Autoattacks are very strange and it’s not clear how they can be related to the theme of Sacred Sword – Janna fires the yellowish bolts of lightning from her hands. In general, all the abilities are very similar to the original, but with a bluish tinge. There are only a few new animations and they are not as memorable as they should be, for example, the new recall simply creates a pond under Sacred Sword Janna, in which she hides her Sacred Sword, and soon disappears herself.

Sound effects still remained based on the elements of the air and they sound quite boring. The developers forgot event to add the water component to them. Monsoon is the only ability in the sound of which you can hear a weak metallic ringing. According to my opinion, the Sacred Sword Janna is a very weak skin, which requires considerable improvement. I do not advise it to buy, even if you like to play for Janna a lot, because she has more worthy options, such as Frost Queen Janna. But if you still want this skin, then I want to remind that Sacred Sword Janna has four brand new Chromas.

You can buy Sacred Sword Janna skin for 1350 RP in the LoL in-game store. 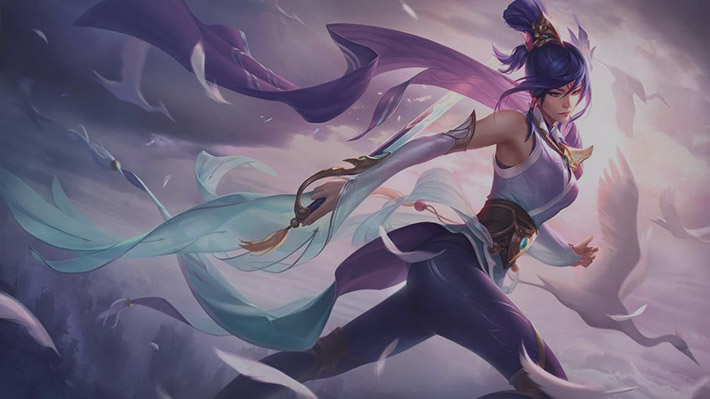 This time, Fiora appeared before us in an unusual style. Elegant clothes vividly emphasize the affiliation of Soaring Sword Fiora to the Eastern swordsmen. The blue color scheme, together with the gold decorations, gives the appearance a finished look. The charming hairpin serves as an excellent decoration for our duelist’s hair, and the gusts of wind that follow the champion remind us of her story. An excellent new look of the character, which greatly changes your vision about Fiora and reveals her from a different angle.

Particle effects added to Soaring Sword Fiora look just great, famous gently pink petals of sakura flyes around the champion and sudden wind blows them into the enemies. Among the new particle effects, the small blue glow around the champion was added. New visual effects give exactly that “wow” effect that is needed, so this time the developers did everything right. New animations include a slightly modified blade blows, and a new recall. Recall simply shows the magical abilities of this sword, Fiora calls luminous copies of Soaring Sword which form a portal, that teleporting our champion straight to the base. Quite boring animations that do not convey the spirit of the East.

Sound effects are accompanied by chime bells, as well as other skins from the immortal journey series. The sounds are quite similar to each other, but still it is not possible to mishear them. In general, the sounds are chosen pleasantly, although the high notes for me are a bit sharp. 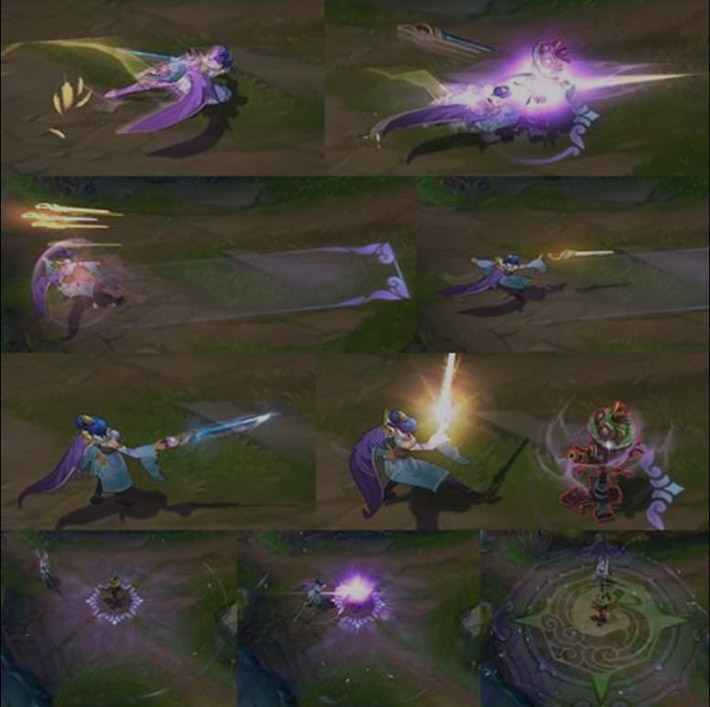 Soaring Sword Fiora is without exaggeration an excellent skin that well conveys the spirit of the mystical east. If the developers had better worked on new animations, then this skin would be priceless, but for now, I recommend it only to Fiora mains, who want to look at this champion from a different angle.

You can buy Soaring Sword Fiora skin for 1350 RP in the LoL in-game store.

If you were pleased after reading this article, then say thanks to the sponsor – Boosteria, the most trusted and reliable elo boosting company. We continuously writing LoL guides and reviews, so do not hesitate and try to check them here.