Long ago, Riots decided to create some skins just because they can, without any backstory, plot, and origin. Developers just thought that it will be cool to represent some champions as high-school students. All that we know about this line of skins is that somewhere there is a mystical academy, and our heroes differ from other students only by frequent violations of the order of the academy. All violations were entered in the personal file, and you will find them further in the article.

Just want to draw your attention to the fact that unlike the Dark Star skins or the Blood Moon, these are pretty old skins LoL skins, and they do not change your champion’s abilities in any way. The only thing that old lol skins changes – Champion’s model, appearance.

New players may be surprised, but yes, in older versions of skins (before rework) and just old skins, the developers did not add any new animations, visual, and sound effects. To justice, I must say that now these skins have only half the cost of modern Regular skins. Thank God that those dark times have passed, and the developers are now making solid masterpieces, that are definitely worth the money they cost. 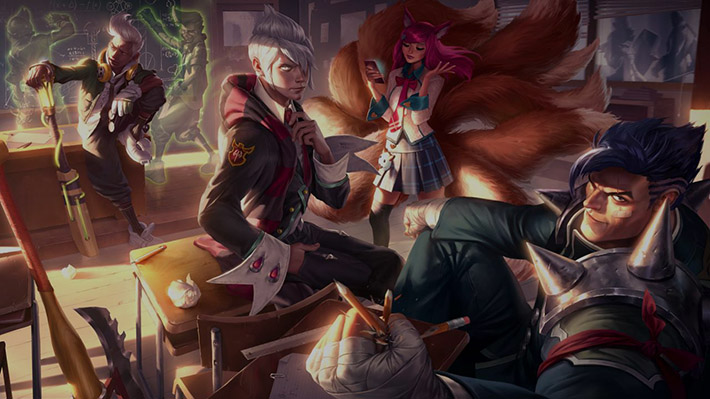 VIOLATIONS INCLUDE:Sticking gum on the water fountain, texting in class, charming other students into completing her assignments, and blasting instructors with fox-fire.

Ahri is looking like a modern schoolgirl. Ordinary school uniform does not provide a place for imagination, but who said that in the Academy they ordinary uniforms? The general concept is simple, but there are some changes that highlight this skin among others. Black and White predominate in the colors of the costume, but the blue border of the shirt adds some noticeable feature. Red tie butterfly looks great, with all the other accessories. In all other respects, this is Ahri wearing a school uniform, neither more nor less. Yes, it looks good, but I cannot say anything more about Academy Ahri.

The Academy Ahri is not the skin that should surprise or change the idea of the champion, it’s just a beautiful skin, which is nice to have in a collection. Although it does not show anything unique, I still recommend it to buy, because for only 750 RP you can dress Ahri in another outfit.

You can buy Academy Ahri skin for 750 RP in the LoL in-game store.

Academy Darius is presented to us in the form of an ordinary athlete in standard school uniform. Well, it’s not quite standard, because he has huge plate spaulders. And instead of a bat, he has some horrible weapon. No seriously, how developers wanted to create an image of a schooler with such an appearance. Why these spiked spaulders, why do he need this huge axe? Even if we accept the fact that he is portrayed as a rebellious teenager, is not it easier for developers to tear off his uniform’s sleeves and give him a regular one, spiked, but still a regular bat. In this form, the skin of the Academy Darius simply does not fit into the general spirit of the series and requires urgent refinement.

As a result, we have a very strange skin, combining classic and school style. Maybe only the ardent fans of this champion. I can not recommend the Academy Darius until these important flaws are corrected.

You can buy Academy Darius skin for 750 RP in the LoL in-game store.

VIOLATIONS INCLUDE:Illegal use of chemistry equipment, illegal use of Academy electronics, splitting time streams in order to skip class, and vandalism of Athletics Department property.

We can clearly say, looking at his appearance, that Academy Ekko is not from the poor ones. He wears the best clothes, with access to the best accessories that can be found in the Academy, Ekko is a stylish rebel who thinks he is smarter than everyone else in this world. Excellent color scheme, although different from other skins in the Academy series, but still fits well into the general, school theme. The weapon was changed to a cricket bat and this is just a great solution (unlike Darius’ huge ax). This is such a straightforward and simple skin, adding only some minor changes to the overall appearance of the champion, but it is still evident that the developers thought it would harmoniously fit this skin into the LoL universe.

Academy Ekko perfectly shows us a schoolboy tattered, which keeps the other fellow students on the sidelines. I can not say that this is a unique skin, but still, it is worthy of your attention and, perhaps, even a purchase.

You can buy Academy Ekko skin for 750 RP in the LoL in-game store.

The Academy Vladimir is presented to us in the form of a pompous and highborn disciple, who, with his whole appearance, shows that he is above the rest by birthright. He looks like a noble student, a little devilish thought. It is a pity that Academy Vladimir was portrayed in the role of a student, it seems to me that the Vladimir teacher could open up the Academy theme much better, especially taking into the account the info that we still do not have any teacher-skins in Academy skin series. An excellent aristocratic school uniform, a pompous red-black scarf, perfectly suited our pale reaper. But the oversized cuffs look ridiculous, and I think that they only spoil this skin, knock it out of the usual rut. Perhaps this idea was adopted to emphasize the vampire essence of the character, but in my opinion, this is perfectly handled by a magnificent and huge scarf.

In the end, we got a rather caricature image of a vampire schoolboy who still looks good enough to cause a desire to purchase this skin, especially if you like this theme and this champion. Academy Vladimir is a good skin, which is worth your attention.

You can buy Academy Vladimir skin for 750 RP in the LoL in-game store.

This article was sponsored by Boosteria, elo boosting company. And do not forget about Season 7 rewards, and remember, only Gold+ players will receive Victorious Graves. Do not miss your chance to obtain this skin and order Elo Boost right now!