Armor and Magic Resistance mechanics are the cornerstones of LoL and we will explain how they work in this guide. They work similarly thus we will consider them both at once. Armor and Magic Resistance are characteristics that all units have. They reduce incoming damage each from a particular source (physical and magic accordingly) by percentage. We will combine these two terms into a single one: “resistance” for convenience reasons. Each point of resistance requires an attacker to do 1% extra damage to a target to make a kill. For example, a champion with 50 armor and 1000 health needs 1500 physical damage in total to be slain. This means the effective health of that champion was increased from 1000 HP to 1500 HP against physical attacks. There is simple formula using which you can calculate reduction on your own.

CHAMPIONS WITH THE HIGHEST / LOWEST BASE ARMOR

Despite that LoL armor and LoL magic resistance working similarly, there is a difference in starting points. Each champion starts with 16-35 armor (to cut it short melee champions get more armor while ranged less) and it grows up with each level up to 65-97 at 18 level (

The only champion who doesn’t gain armor per level is

Thresh due to his passive ability

Damnation which increases his armor for collected soul instead.

Singed. Champions who are able to change their forms from melee to ranged and back also do not gain magic resistance per level, e.g

Armor and Magic Resistance are working great with shields since they increase their effectiveness, e.g. 250 HP shield on 100 MR would provide 500 effective health against magic damage.

If you want to build strictly defensively to increase your survivability recommended item for armor are:

Among the magic resistance items each champion can find something unique for himself.

ADC can use Maw of Malmortius or Quicksilver Sash;

Supports are looking for Mikael’s Crucible or Locket of the Iron Solari;

If during LoL games you don’t always know what to buy armor / magic resistance or health to spend gold effectively you may use this graph to make a decision: 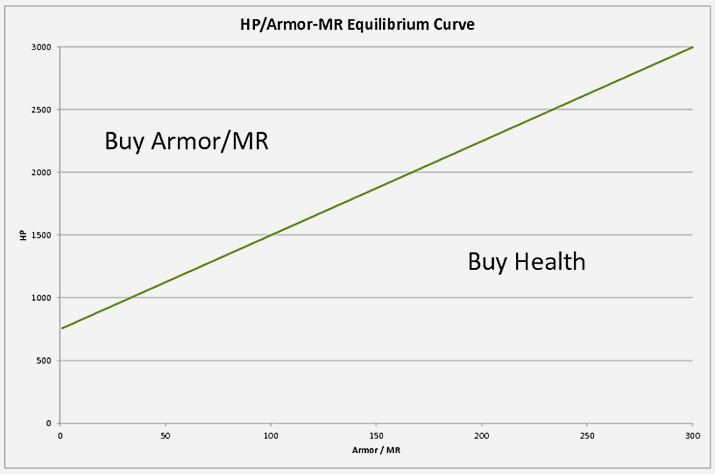 Examples showing how you can use this graph for calculations in LoL:

If you have no defensive items yet most times it would be better to start with health item first. However, at champion levels above 10, you should consider buying armor/magic resistance (check graph).

In LoL champions have a lot of useful skills and among them, a lot of abilities greatly increase physical and magical defense. For example:

As you can see most of these abilities increase both magical and physical resistance. And another thing – the damage of some champions depends on the armor, like Taric’s Shatter or Malphite’s Ground Slam.

Here I want to tell about some useless, but still interesting info about some champions and their synergy with some artifacts and masteries.

Armor penetration decreases armor of the target, and if your champion has 10% of armor penetration this means that you will deal 10% more damage. But in LoL, we have 2 options – Armor Penetration and Armor Reduction. The only difference between them is that Armor reduction will reduce armor even if an enemy has no armor at all. You can decrease his armor lower than 0, and in this case, an enemy will receive a bonus damage.

All champions have 0 penetration from the beginning of the game, but it can be increased by various runes, talents, items and champion abilities.

There are two kinds of penetration in LoL: percentage and flat. Percentage penetration always goes first in calculations.

Example: Imagine that a champion who has

The Brutalizer (provides 10 flat armor penetration) attacks a target who has 200 armor. Champion would attack as if the target had 200*0,65-10=120 armor. If we use formula listed above we can calculate that champion would deal 45% of his total physical damage instead of 33% that he would have dealt if he had no penetration at all.

Percentage penetration stacks multiplicatively. It can be roughly described as each successive source gives less effect than its absolute value, e.g 35% magic penetration from

Void Staff and 6% from

Devastating strike mastery lead to 100-0,65*0,94=39% magic penetration (not 41% as if it would stack additively). You can check it yourself by opening champion sheet in the game (Hotkey “C“).

Penetration in LoL allows you to do true damage to the enemy but not more than that. If you have 40 flat armor penetration and your enemy has 30 armor, you’re still going to do damage as if the enemy has 0 armor (not -10).

Even if it named slightly differently, it still works in the same way, despite the fact that in calculations in goes before penetration.

LoL has only one item that provides the effect of the armor reduction – The Black Cleaver.

Lethality is calculated by the next formula – (0.6 + 0.4 * Target’s Level / 18). From the formula, we can see that the Lethality will work better in the late game, where everyone will have the same 18 level. For example, if an enemy has 18 level, you have 20 Lethality and attacking an enemy that has 30 armor, the damage will be dealt like he has only 10 armor.

Armor of most monsters jungle varies from 6 to 15, therefore, it’s better to have attack damage runes.

Devastating strike gives up to 6% of armor and magic penetration.

Apart from items and masteries you can receive resistance penetration from runes.

There is the instructional video about the difference between attack damage and armor penetration in LoL with detailed numbers and calculations. We recommend you to watch it.

Items that provide armor penetration in LoL are:

Abilities that provide armor penetration in LoL are:

Talent that provides armor penetration in LoL is:

Items that provide Lethality in LoL are:

Talent that provides Lethality in LoL is:

Runes that provide Lethality in LoL are:

The item that reduces magic resistance in LoL is:

Abilities that reduce magic resistance in LoL are:

Items that provide magic penetration in LoL are:

Talents that provide magic penetration in LoL are:

Runes that provide magic penetration in LoL are:

There are only one item in LoL that provide armor reduction – The Black Cleaver.

Abilities that provide flat reduction of armor are:

Abilities that provide percentage reduction of armor are:

Roar of the Slayer

Abilities that provide flat reduction of magic resistance are:

(up to 24 magic resistance reduction at 5 rank),

Terrify on a target),

(up to 25 magic resistance reduction on auto attack).

Ability that provides percentage reduction of magic resistance is

Abilities that provide both percentage reduction of armor and magic resistance are:

There is a type of damage which allows to ignore resistances of a target or any other form of damage reduction e.g.

Nocturne if he has

Ignite is an exception and can’t be blocked by spell shields however it would be absorbed by any ordinary shield, e.g.

Crest of Cinders buff for 120 seconds which makes your auto attacks slow enemy movement speed by 8-15% for melee champions and 5-10% for ranged champions. Slow amount depends on level of champion and increases two times at 6 and 11 levels. Also,

Crest of Cinders makes target burn for 3 seconds dealing 8 + 2 x level true damage per second. If the buff holder is slain, this buff is transferred to the killer. In this case, the duration is refreshed. Additionally, regenerates 1% of maximum HP every 5 seconds.

Spell vamp works with any ability which deals true damage however life steal has no interaction with true damage at all.

No, true damage can’t be reduced.

We have other guides along with services that we provide that may interest you: