Quick review on the reworked Evelynn and her updated skins.

It’s nice to realize that Riot Games does not forget about the old champions and slowly enhancing their appearance and abilities. This time the developers paid attention to the lovely demon Evelynn that was forgotten. This champion is simply fascinating, and it’s not surprising because succubus must be attractive and fascinating.

Evelynn lures the victim with deception, assuming the appearance of a charming woman. If you ever follow the demoness, you will soon find yourself locked up in a realm of suffering and torture. The fact is that Evelynn enjoys other people’s torment and revels in pain and diligence. But unfortunately the ordinary mortals do not last long, that’s why Evelynn went to the battlefields to catch the strongest champions of the LoL in her deadly embrace. 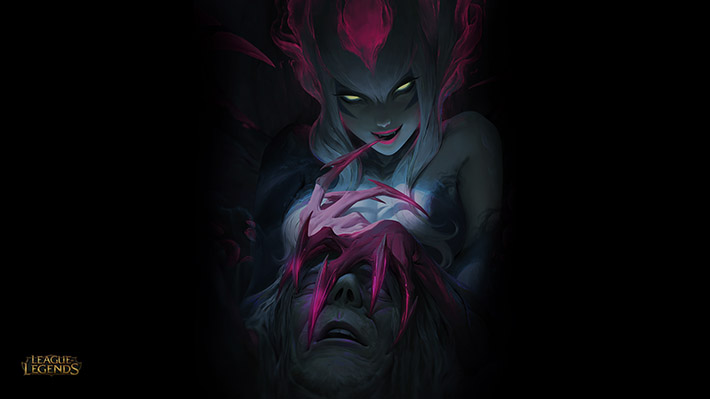 Evelynn was reworked greatly and now many her skills were changed beyond recognition. Many abilities have become more interesting and depend more on the skill (became skill-shots). In general, the game now will be not as risky as before, but to ganks became much more interesting.

If Evelynn is out of combat, she hides herself with the Demonic Shade, in this condition, she quickly restores the missing health and from the 6th level, the Demonic Shade provides disguise (not the invision, remember the Season 7 changes) – the Champion can be seen only if there are nearby there are enemy champions, totems or towers.

During this ability, Evelynn’s walking animation changes, and a gray circle appears around the champion, showing how far the champions will see it. A special indicator, visible only to Evelynn, will notify you when the enemies are close to finding the champion or have already discovered you.

Evelynn deals a quick hit in the chosen direction and deals magic damage. Auto attacks inflict additional damage against targets that have been attacked by Hate Spike. A key feature of this ability is that Evelynn can use this ability three more times, with each subsequent use, she releases through the nearest enemy a chain of spikes that damage all affected enemies.

Hate Spike is an auto-targeted ability and that means that you have no need to choose a target, the closest nearby enemy will be selected as a target, but Hate Spike has other priorities – it will prioritize Evelynn’s most recent target.

Evelynn curses her target, briefly revealing her location. Attacking with auto-attacks Evelynn will remove the curse from the target and also significantly slow it down and restore some of the mana spent on using the ability.

Enemies enchanted by Evelynn takes extra damage, and their magical resistance is significantly reduced. Against minions, this effect is much stronger. This ability has a curious mechanic, after using the Lust Dust the disguise of the champion will not disappear.

It’s not strange, but this ability does exactly what it should, Evelynn beats the enemy with her whips, imposing effects on hit and dealing damage, which depends on the maximum health pool of the target. Similarly, the movement speed of the Evelynn for a short time significantly increases.

If Evelynn is disguised, then the whiplash blow is replaced by an Empowered Whiplash. This variation is different in that Evelynn also draws herself to the target and only then strikes, and imposes effects-on-hit on all targets nearby.

Demoness radiates wicked energies in a cone in front of her, destroying all enemies, especially powerful damage is inflicted on enemies with a low level of health. While Widowmaker is active Evelynn enters the untargetable state. After applying the ability, Evelynn teleports back.

In the golden age, Evelynn was a very strong champion and occupied a special niche. A distinctive feature was her ability to begin an aggressive game early, thanks to the invisibility. Because of this feature, she received an early advantage for herself and her team, which only grew stronger with every minute. Of course, Evelynn had her own minuses, for example, she extremely badly clear jungle minions.

Unfortunately, her position could not remain a long lead and soon multiple nerfs followed and eventually we got a mediocre champion. Her skill set was pretty outdated, and also the damage and survival rates were pretty bad. But now, after reworking, Evelynn looks like a very interesting champion.

With the new set of skills, Evelynn became a completely different champion, for example, she lost her invisibility on the first levels (it now appears only with 6th level) and at the same time, she lost the opportunity to run around enemy totems. But to replace the lost pros, she was given tools to quickly and effectively clean up the jungle. Now Evelynn is a good jungler, which feels comfortable in the jungle. All other abilities have become much stronger, but now they have become more difficult to use. Now your accuracy that the success of your gang depends now. Since Evelynn is devoid of strong control skills, your skill now plays a decisive role in the outcome of the fight.

A nice addition, now our demoness have a great CC ability – Lust Dust, but it must be able to properly implement. Namely, you must hang a debuff on the enemy, wait a couple of seconds and only then attack, so that the goal gets the maximum slowdown. After a couple of games you will get used to the long charging of the curse and will be able to use this ability with the maximum results. Also especially pleased with the possibility of Evelynn to quickly reduce the distance to its purpose, as well as the fact that it is impossible to attack when it applies an ultimatum ability.

In general, the gameplay of this champion has become much more diverse and interesting. Though early domination, for which many loved it, and now in the past, it is still as strong in the battles of 1×1 and can be useful in team battles.

As you already know, her distinguish in now available only at 6 level, just with the Widowmaker [R] and from this time she received back her aggressive role. With this ability she became untargetable, and that’s mean that she could dive under turret right at the 6th level.

Enchanting your target with Lust Dust [W], you decrease it’s magic resist, this opens a great variety for following actions, especially if your team have a lot of mages that could help you in your initiation.

Clearing jungle camps, use your [Q] accurately, try to attack with the Hate Spike on the biggest minion in the camp. If you made everything right, then your abilities will deal extra damage on it, and you could AoE smaller minions with the thorns.

Since the very appearance of the Evelynn has changed a lot, her skins have been changed as much. Developers have already shown four updated skins and they look damn good. We can not fully evaluate their visual and sound effects, but this article will be updated as soon as additional information is received. 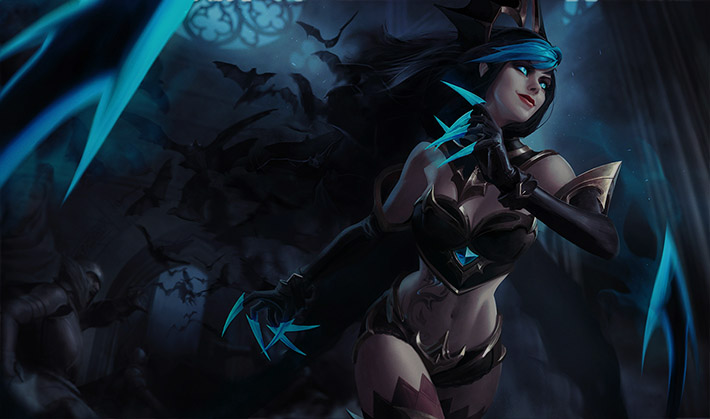 In comparison with the past skin, you can accurately say that she has become more mature. But this does not diminish her sexuality and even vice versa adds it. The Shadow Evelynn skin itself has changed a lot, like splash art, and now we have not a half-naked seductress, but a charming sorceress with long claws.

In addition, I wanted to notice that this is the only skin that has updated visual effects. Of course UPDATED is a too heavy word, but at least they were recolored to fit the Shadow Evelynn skin theme. Sounds were enhanced too, and I love them. They please my ears with melodic light sounds. 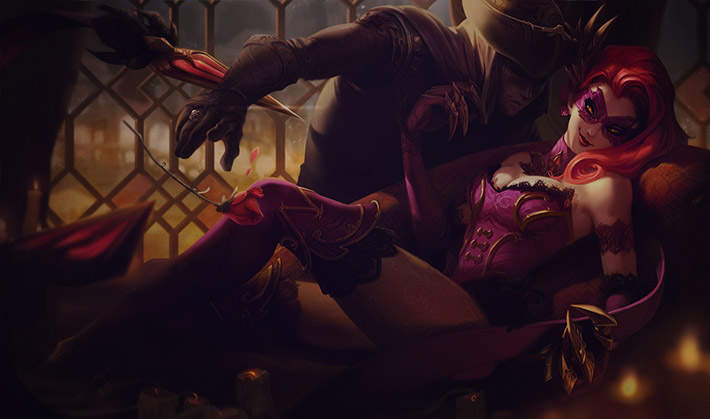 Masquerade Evelynn and before the upgrade was an extremely seductive skin, but still for some players thought that it was extremely open, that’s why the updated Evelynn Masquerade skin looks a little bit more closed. But it does not matter since by picking the right clothes and colors they only encourage the fans of the game to create seductive cosplays and various fanart. 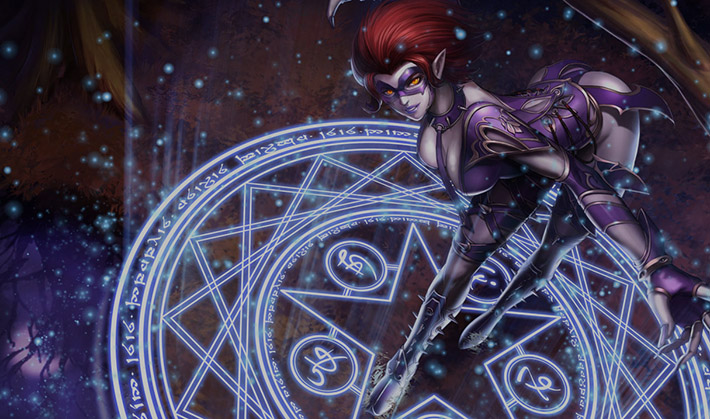 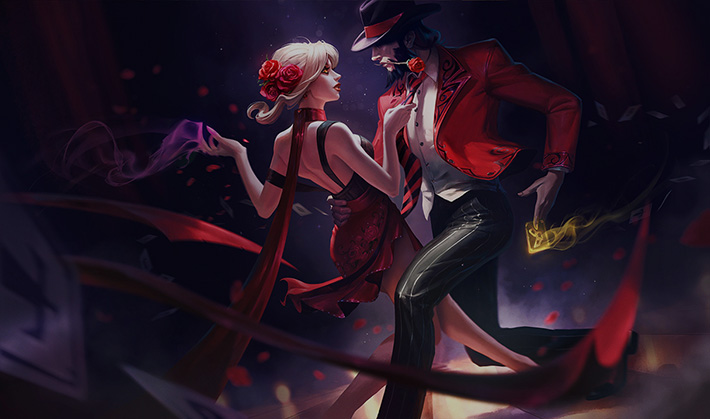 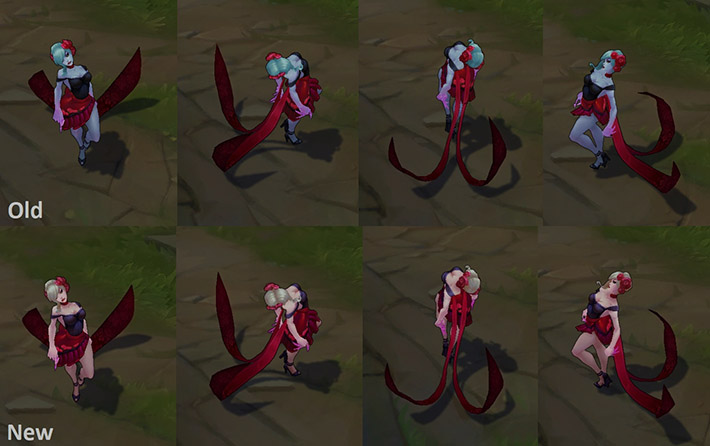 The very core of Tango Evelynn has not changed, she is still the same passionate tango dancer, but this time she was repainted in a blonde and as a whole look like an ordinary human being (in the last build, she even changed her skin color to white). All the same red screaming dress, all the same bloody roses in the hair, in the end, we got almost the same skin as before, which is a little disappointing, especially compared with the other Evelynn’s skin reworks. 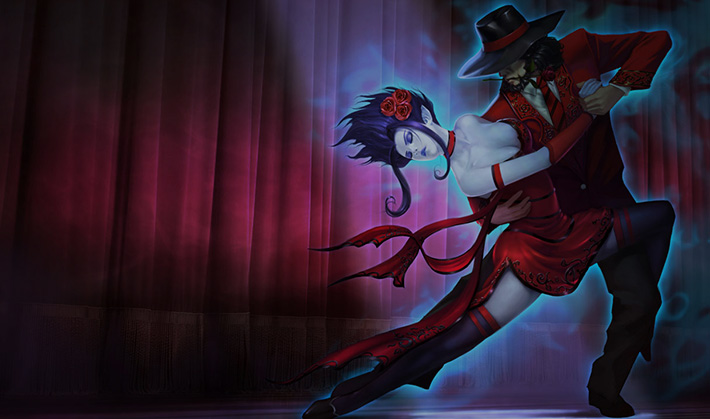 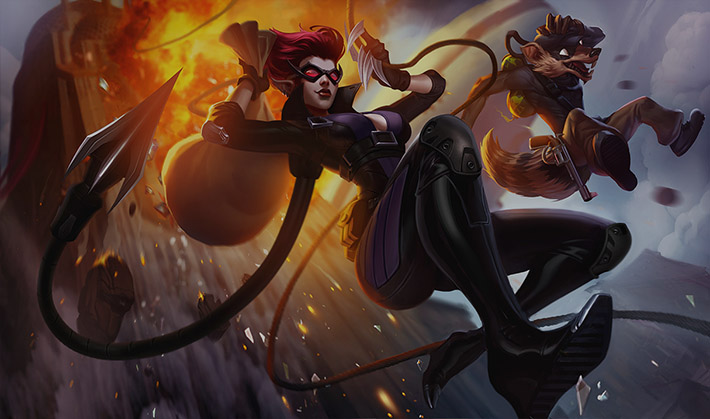 I understand a lot, but I can not understand it. Why developers were trying, dramatically remake the previous splash arts and Evelynn’s skins, when later they just took and did what you see below. Did the Riot Games not have enough finance or time to get things done well? Or is the problem somewhere in a different place? And no, I do not think that the previous skin was ideal and therefore it should not be changed, on the contrary. I believe that this was one of the weakest skins for Evelynn and I was extremely annoyed that it was not turned into something better or not completely redone. Strongly I doubt that the secret of the success of the new skin is in the addition of a cat hook and a clawed glove. And I completely agree with the opinion of LoL community – in this Safecracker Evelynn skin, she is extremely similar to Vayne, which deprives her of her personality. 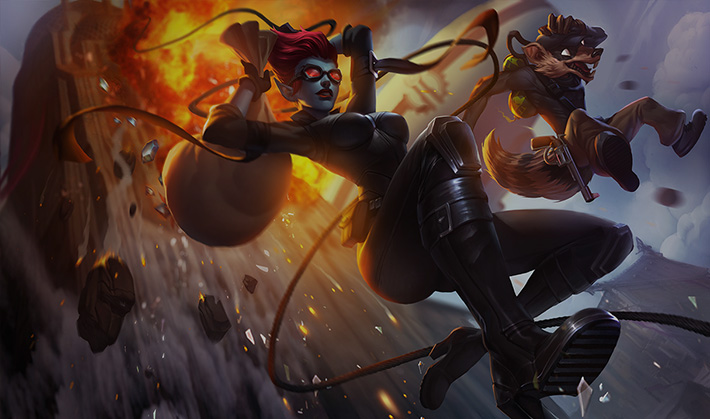 Boosteria continuously writing various LoL articles and provides the best Elo boosting services among the market, so do not hesitate and try them out, especially now, during the special sale.