Imagination of the LoL developers is really unique, here you can find many awesome things, like: 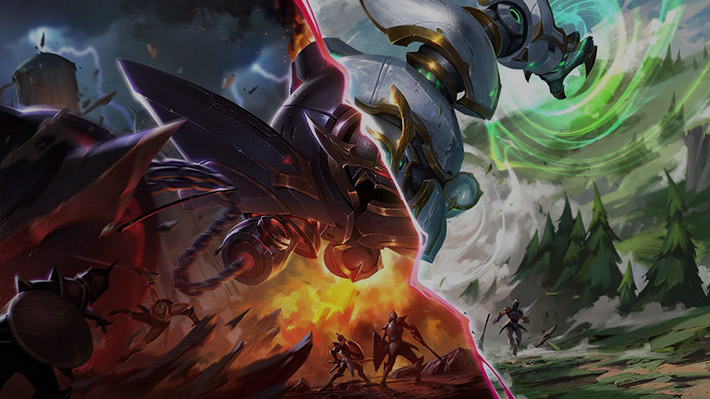 But this time Riot Games made a rather strange move – they are preparing to release two new skins at once, but for one champion. Developers for a long time could not decide in which direction to persuade the origin of the new skin – whether the new image of the champion will be a personification of mercy and light, or else it will be an unstoppable warrior of darkness, ready to destroy anyone who has risen in his path. It is thanks to these disagreements within the development team we will be able to see two unique and incredibly elaborate skins for one of the most famous Champions in the LoL – Blitzcrank.

So how did the idea of creating two skins at the same time arise when they trying to create only one image? The thing is that during the work, the team of designers and developers thought that these two, opposite in nature, skins will be an excellent addition to each other, and players will be able to choose the one that is interesting to them.

Work on the new skin takes place in several stages:

With the first point the artists coped quickly, this is understandable because the image of a mechanical knight is very harmonious with the background of Blitzcrank.

During the second step, everyone unanimously agreed that the most famous ability of the champion is Rocket Grab. That is why the artists immediately offered many different options as this ability may look for given theme. After all, Blitzcrank’s hook is the very essence of the champion himself and therefore a new image must be built around this ability.

In the end, in the favorites were chosen 4 options, which you can see in the picture below:

After creating the last sketches, it was decided to stop on the idea of the Lancer champion. The whole idea of the hook was chosen from the second column, but half of the developers decided that the black version looks more preferable. This design looks aggressive, exactly as Lancer Blitzcrank should look on the Summoner’s Rift. All the previous skins for Blitzcrank lacked aggressiveness because according to the original idea it was not created as a machine for destruction, and Lancer Blitzcrank perfectly knocks him out of the usual rut and gives new sensations when you playing with this skin. And at this point, a small conflict arises, in which the truth originated. – Why not try to create two skins, a paired image of the Light and Dark Lancer? The idea came out so interesting and qualitative that they could not refuse any of them.

The first was decided to create the Dark Lancer – huge, massive, aggressive. The dark red color palette perfectly conveys the mood of doom and cause a sense of quick death in the hearts of enemies, and the golden outlines come in beautiful contrast with the rest of the colors. 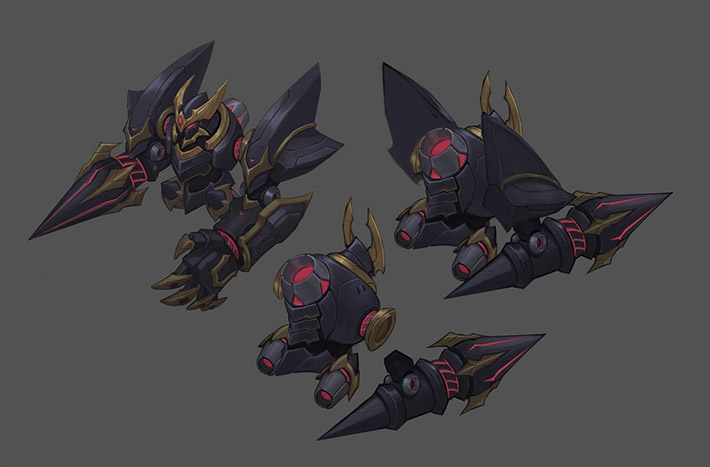 The Dark Spearman already had the frames of his final form, and developers decided to use it as an excellent basis to work with to create the Light Lancer Skin. New animations and some effects were decided to apply for two skins at once, this decision would spare time for more careful work on the champion’s model and visual effects so that these two images did not seem like ordinary Chroma skins.

In the end, instead of one Lancer Blitz, we will get two, and only you will decide which of them are cooler.

Special information for aesthetes, Splash art provided below is not their common, each skin on the release will have a separate splash art.

This is truly a unique experience, and it remains only to wait for the reaction of the players to this experiment. Perhaps in the near future, we will see more excellent skins in the LoL. 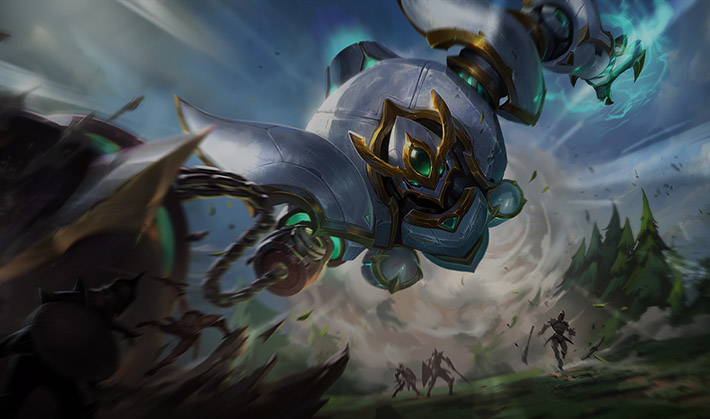 Lancer Paragon Blitzcrank gives me positive feelings, it looks very much like the legendary combat robot from the game Epica Stella (Vanguard Bandits). A pleasant combination of colors – White armor with energy lines of green color and gold ornaments together look very noble. Armor themselves have smoothed corners and look massive, but at the same time, it does not look threatening at all, but rather even on the contrary inspire confidence in the wearer of this armor. From Paragon Lancer Blitzcrank comes a slightly bluish glow, and on a helmet with the shape of a classic samurai helmet can be seen a huge green gemstone. Lancer Paragon Blitzcrank looks wonderful and brutal outwardly and even it’s a pity that with the role of support this whole brutality will be invisible. 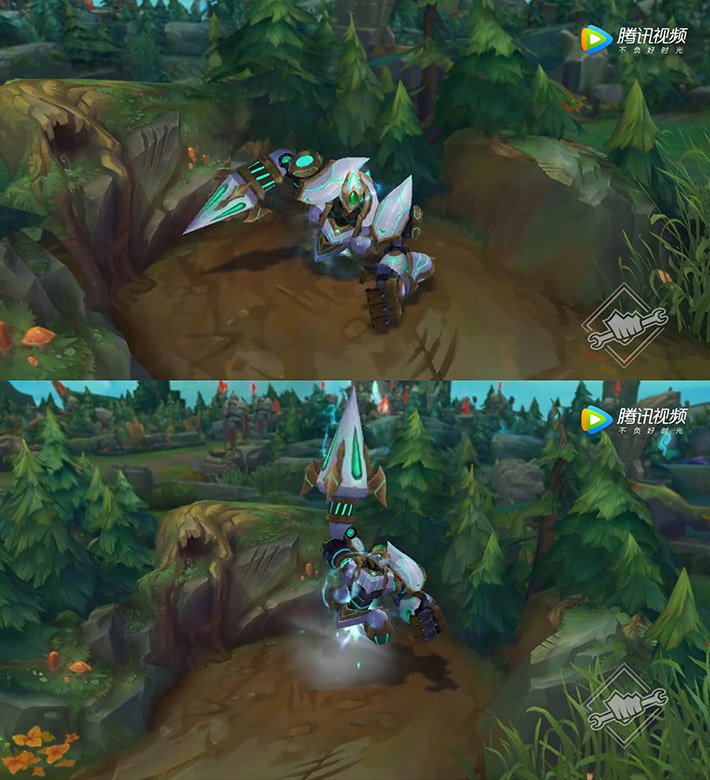 Visual effects are executed qualitatively, and the hook itself now has the form of a huge balance. Particle Effects have a blue glow, which is especially evident when using the Blitzcrank’s abilities, like Static Field and Overdrive. When accelerating, the champion leaves behind him a repulsive jet track. The new animation of the recall is interesting but uses the experience of other skins. Lancer Paragon Blitzcrank throws his lance into the air and soars into the heavens. Something similar we already saw in the Super Galaxy Gnarr’s recall animation.

Sound effects are performed remarkably, the sound of a perfectly tuned machine, without unnecessary noise. It’s a pity that the champion’s abilities are not noisy, this sound quality I’m ready to listen to for a long time. Lancer Paragon is a wonderful skin showing this champion in the form of a fighting vehicle designed to protect all life forms. I definitely recommend Lancer Blitzcrank to everyone, but which of the two options you should decide by yourself, but I personally will get both variants. 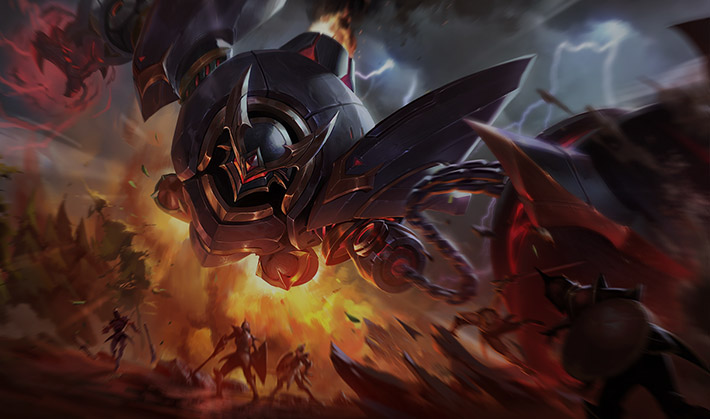 Lancer Rogue Blitz – dark, aggressive, brutal. It’s quite unusual to see Blitzcrank in this way, but I must admit that he looks at least spectacular. The dark red color combination can already be called classic villainous, and the gold decorations of the armor create a visual contrast of colors, which cuts into the memory. Although the developers tried to create differences in the images of Paragon and Rogue, but these differences were too minimal to speak about them. 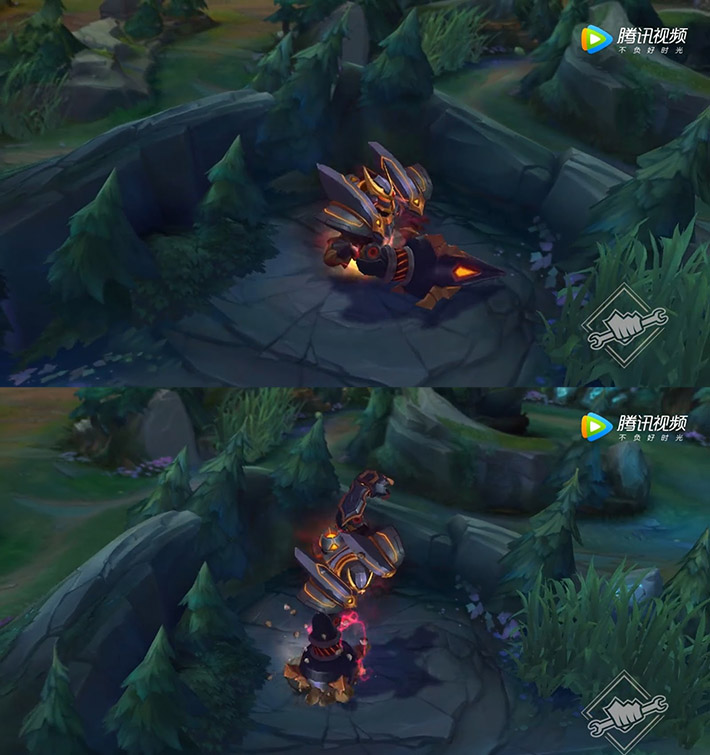 The visual effects in everything repeat the same as the twin-skin. The main difference is only in the color scheme, as the armor itself, particle effects now have red glow mostly. Although the animation of the recall is opposite to the Paragon Lancer – this time, Rogue Lancer Blitzcrank is buried in the depths of hell, from which he came out.

The sound effects are different from Paragon Lancer, they have strange noises and distortions, indicating that the program is not working properly. The sound just perfectly conveys the mood of the skin, it’s a pity that with the visual part they could not show the same diametrically opposite approach. 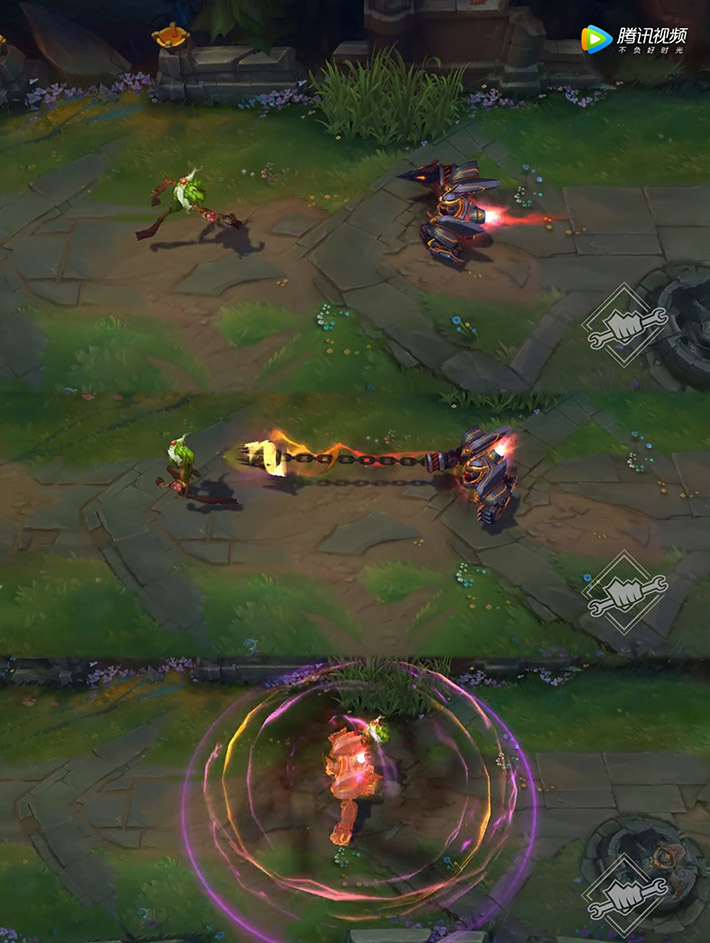 In general, no matter how hard the developers tried to create two unique skins, in the end, they created just another Chroma skins. Yes, sound and visual effects have a few differences, but we have the same Lancer Blitzcrank. Which of them deserves your attention only you must decide, but at least one of them deserves a place in your collection.