What are quick/smartcasts in League? How to set them on? How does they work? Smartcasting guide.

Except being good at mechanics and decision making, you have to be in comfort with tools which role is to provide a communication between you and game. One of such tools in LoL is quick cast (was known as smart cast before, we will use both variants in this quickcast guide). This short guide is for new players or players who are not familiar with quick cast option in LoL. Also we will consider smart cast vs normal cast and consider what is better.

WHAT IS LoL QUICK CAST AND HOW DOES IT WORK?

Quick cast makes the selected ability casted automatically in the direction of current position of your cursor (e.g. Karma’s Q) or on the position of your cursor (e.g. Annie’s R). This saves a lot of time in terms of the game since you avoid necessity of making left-click to confirm the cast. Any champion ability can be set on quick cast mode in the game options. Check these two examples (without quick cast and with quick cast) to see difference with your own eyes and decide should you use quick cast in LoL or not.

That’s usual type of ability cast when you see a targeting graphic and then have to left-click to confirm ability cast. This type of ability cast provides you with possibility to better aim since you will see range indicator. Also it’s very useful when you don’t know exact range of your spell and just started to learn champion. After you will learn range, projectile speed and other necessary characteristics of champion ability you can swap to quick cast. Despite that the type of cast is personal choice, we believe that for some LoL abilities it’s better to stay on normal cast:

That’s not the all abilities which “must have” quick cast (smart cast) on and above listed are just examples. As you see most champion abilities in this list are gamebreaking abilities which has long cooldown and demands precision.

Quick cast can be used on all champions and most their abilities because they speed up your ingame performance significantly but hiding ranger indicator. We will list situation where you can implement smart casts in LoL.

CHAMPION ABILITIES ON WHICH QUICKCAST IS ALWAYS ENABLED

On some abilities quickcast is enabled by default and this can’t be changed. That was done because using these abilities without quick cast would be extremely hard.

HOW TO ENABLE SMARTCAST IN LoL?

Now, when we already discused what is smart cast in LoL, it’s time to start using this useful feature. Turning it on is pretty easy and can be done in two simple steps:

However, it’s not always good idea to set each ability on quick cast therefore we recommend you to set up custom layout using “Additional Hotkeys” section below: 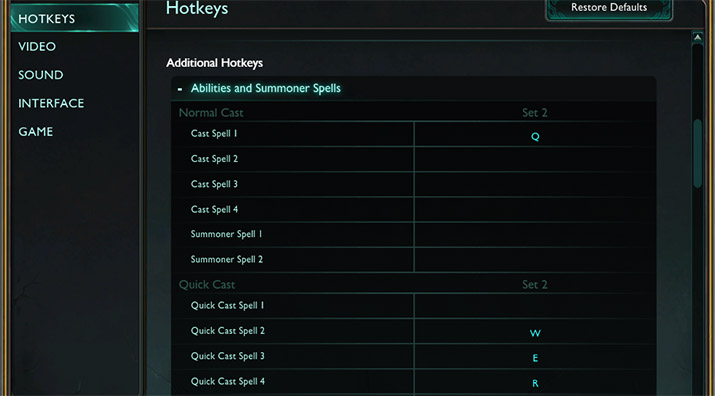 There are some minor but important details which we will discuss in this part of our quickcast guide. For example, smart cast can’t be binded on the mouse side button.

There are two linear skillshots which interact with smart cast system differently:

If you turn quickcast on on these skills they will act differently than others. In this case, you have to press the button and hold it down until you draw a line of a skillshot and then release it. If you just will press a button as you do usual it will be casted in the front of your champion and unlikely that what’s what you want to happen.

There is a quick cast with indicator option in the game. This works as follows: while you hold an ability key you see a graphic indicator, when you release the key then an ability will be casted. You cancel it by mouse right-click. This option leaves you a right to make a mistake and change your decision.

Setting up quick cast with indicator

QUICK CAST PLUS SELF CAST

There is a simple combination of “ALT” + “ABILITY HOTKEY” which allows you to use abilities on yourself (of course, it works only with abilities which can be used on yourself).

Examples of such abilities:

However, there is another option: “Smart cast + Self Cast“:

It works as follows: if there is no appropriate target for your ability then it will be casted on yourself. It’s very profitable for champions like Janna and her Eye of the Storm (E), it allows her to cast shield on herself just by pressing “E” without moving cursor or additionally pressing “ALT” key.

HOW TO USE LOL QUICKCAST TO IMPROVE INGAME PERFORMANCE

Instantly using your ability without clicking to confirm it boosts your LoL performance without any doubt. Despite of obvious advantage of speeding up your abilities implementation by two times, there is an obvious con of not seeing graphic indicator of range. Because of that, to start getting advantage of using smartcast it can require spending time in practice (on each champion separately). However, setting a quick cast on each ability is not always a good decision therefore you have to decide everything by yourself. This video demonstrates advantages of smartcast lol.

Smart cast is especially useful on champions with cooldown renewal mechanics. Very likely you already noticed how Irelia can clean a minion wave using Bladesurge in a few seconds. There is a better example: Katarina. You can see in the next YouTube video performance of which can not be repeated if player would use the usual casting method, having to left-click manually each time:

We hope that in our guide you found an answer on questions: “What is smartcasting in LoL?” and “How does it work?”.

We also have different content and services that we offer that may interest you in: