Mecha is a line of the alternative universe skins in LoL, also known as the Dystopian Timeline. It is the same universe where Viktor’s glorious revolution plans came to life. He was able to upgrade the most famous monsters of the Runeterra (in LoL, this series of skins called as The Evolution or Battlecast).

Creator Viktor did this to show the world that his way – way of the Glorius Evolution is the best. But the rest of the world was ready to defend. A group of Bundle CIty’s well-known scientists (Heimerdinger, Rumble, Ziggs) created tremendous combat robots to protect their homeland. This project was named as Mecha. Also, there is information about another group called PROJECT which successfully stands against Viktor’s conquest plans. 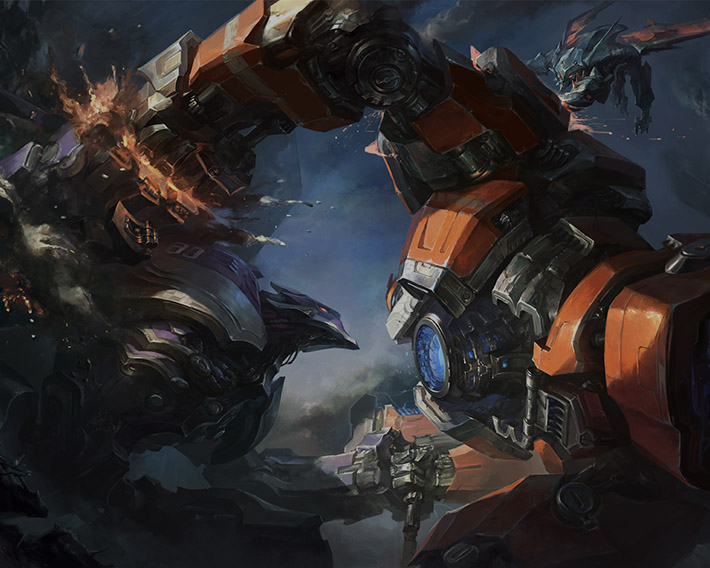 Information about the fact that the Mecha universe and The Evolution universe is the same one came to us from the interaction of the Mecha Zero Sion and Viktor:

“THE PINNACLE OF YOUR GLORIOUS EVOLUTION STANDS BEFORE YOU,  VIKTOR. ARE YOU NOT PLEASED?”

This phrase does not directly say that Viktor is the one who is responsible for the activation of the Meha Sion, but suggests a thought that the Machine Herald corrupted his program to gain another soldier to his Battlecast army.

And on the PROJECT: Katarina splash art we can see Battlecast Vel’Koz (or at least something that really looks like him) in the background. That proves that all these universes are the same one.

Unfortunately, Riot Games are incredibly greedy for the lore details of this series of skins. The only thing we know is the thoughts of the awakening Mecha Zero Sion. Prototypes have cleared all testing stages. TXN-9 components are stabilized, and transformation protocols have been fully enabled. We will begin rolling out 00,  01, 06, and 13.

Breach in the protocol. Mechas are at 5.21% deviation. Prototypes will undergo corrective programming.

00 has rejected its reprogramming. All other prototypes have resumed service. 00 has been decommissioned indefinitely. 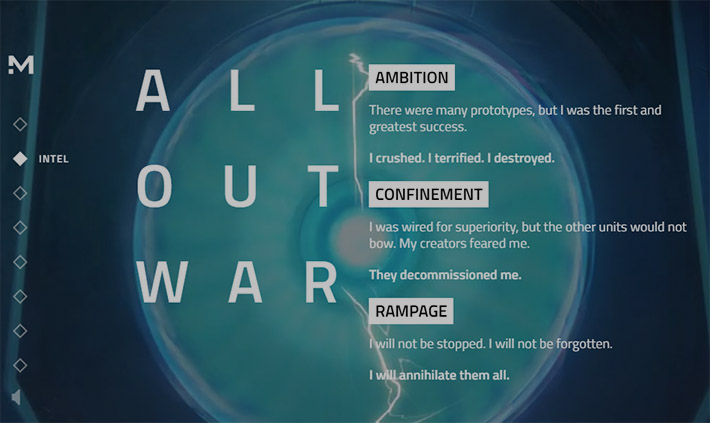 There were many prototypes, but I was the first and greatest success.

I crushed. I terrified. I destroyed.

I was wired for superiority, but the other units would not bow. My creators feared me.

I will annihilate them all.

It is immediately evident that Riot Games took inspiration from The Transformers and the Pacific Rim. The design of the massive war machines themselves, the summoner icons, and the new wards – all these look so familiar, even if you look at them for the first time.

At the moment, we have information about only 4 of the 14 prototypes. Mecha Zero Sion was the first of them, but for some reason was deactivated until recently. Now he is awakening and is eager to prove that all subsequent models are not worthy of being called as Mecha. 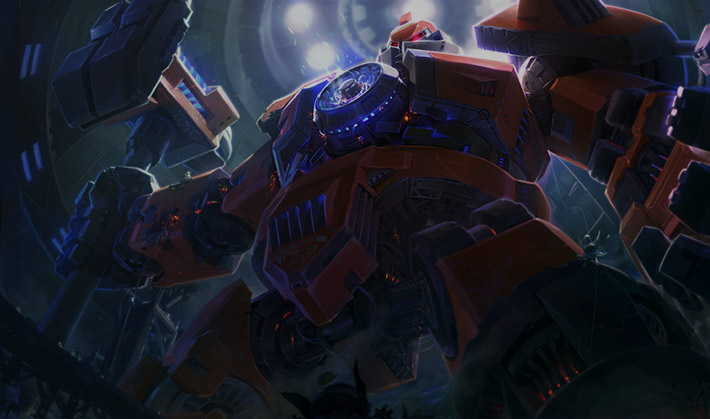 Sion received his own Legendary Mecha skin, and it significantly changes the champion, but Riots do not alter only one thing, he is still a marionette in a hand of a puppeteer, and this time the puppeteer is Creator Viktor.

The new model has some interesting parts that were attached to the top of his body, but as soon as you see Mecha Zero Sion transformation, all the questions about form and anything else will disappear by themselves. The new technological feel of this skin is so attractive and recognizable to all who was watched The Transformers cartoon in the past. 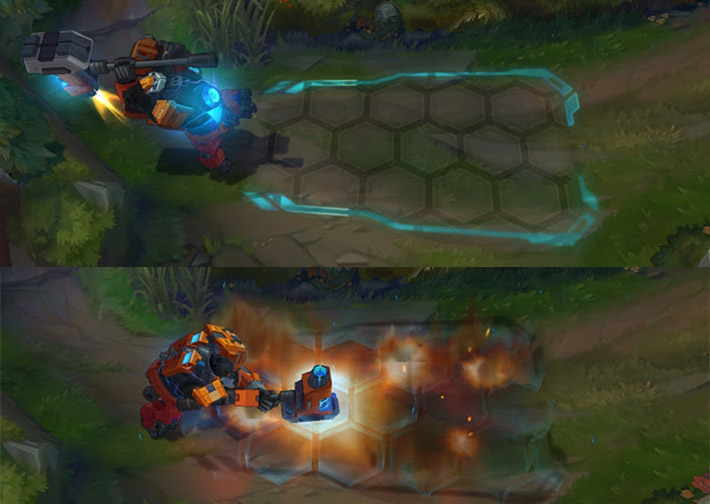 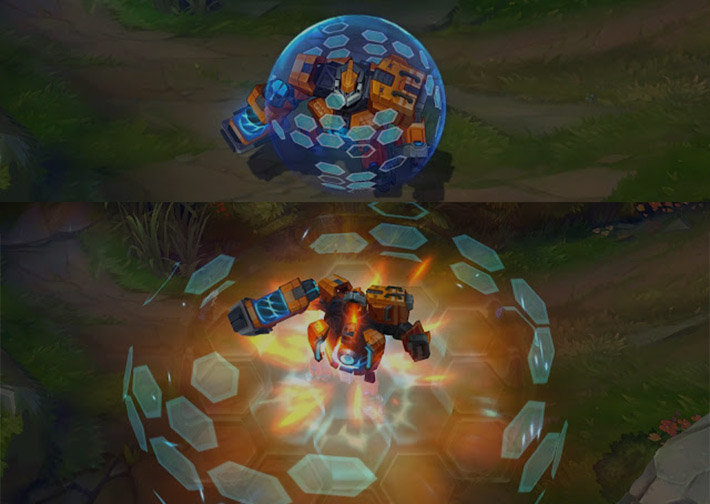 New visual effects are impressive, and these hexagonal particles look great with these Mecha skins. They are especially attractive with the Decimating Smash and Soul Furnace. Just look at that visual and aural feedback. Passive ability Glory in Death is great too, but I feel some lack of visual or sound content between the initial explosion and resulting death. None of Sion’s actions (except recall and respawn) didn’t receive new animations, but they were adapted to better fit the artificial behavior of this champion. Oh, and last but not least thing that I want to highlight is the most beautiful animation that this skin has – Unstoppable Onslaught. This ability takes advantage of the Transformers and uses it with great effect.

You can buy Legendary skin Mecha Zero Sion for 1820 RP in the LoL in-game shop. 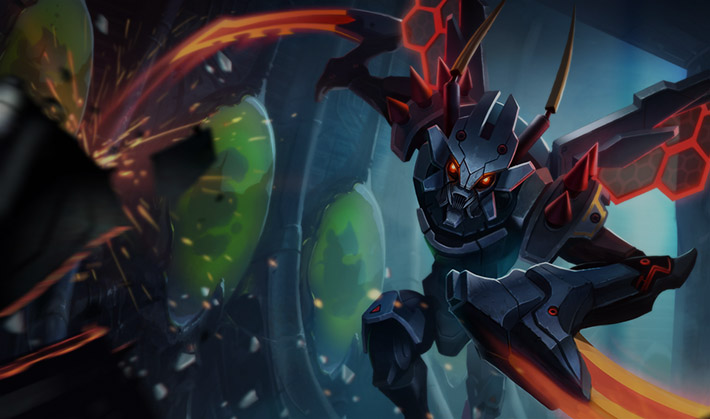 Mecha Kha’Zix appearance was changed cardinally but still, we see the same Kha’Zix only in new, more mechanical outfit. He is played and looks absolutely the same because the original concept was taken as a basis, but it was adapted for the Mecha series. The only thing I like about this skin is that the developers were able to keep the senses of the dexterous and agile warrior even in such a cumbersome and metallic form.

So let’s go straight to the abilities – new animations were not added and this negatively affects the feeling that you are playing as a mechanical creation. The designers tried to create this feeling with the help of particles effects and new sound effects, and they almost succeeded, because new SFX and VFX are really done at a high level. 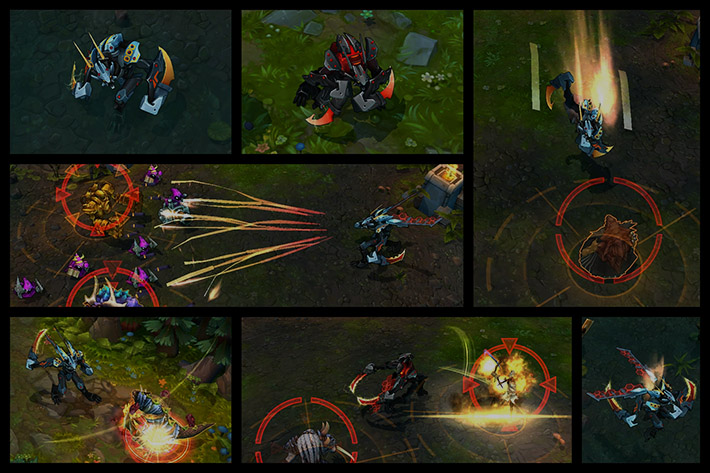 Summing up: If you like the basic concept of this champion, but you want to look at him from the other side, then you can safely buy this Mecha Kha’Zix skin. In all other cases, I can not advise him, as you will not get new feelings when playing as Mecha Kha’Zix.

You can buy Mecha Kha’Zix skin for 1350 RP in the LoL in-game shop. Malphite is a living rock and he was huge and frightening even before transformation into a mechanical form. Unlike Mecha Kha’Zix, designers did not need to spend their energy trying to find a way to maintain a sense of dexterity of this champion. Malphite is a living embodiment of strength that fits the champions of the Mecha series.

Mecha Malphite got an interesting model that looks pretty simple, but only until you noticed the complicated mechanisms fixed on his back. These mechanisms are used to activate abilities, the animations and visual effects of which have been modified to fit into Mecha fantasy. 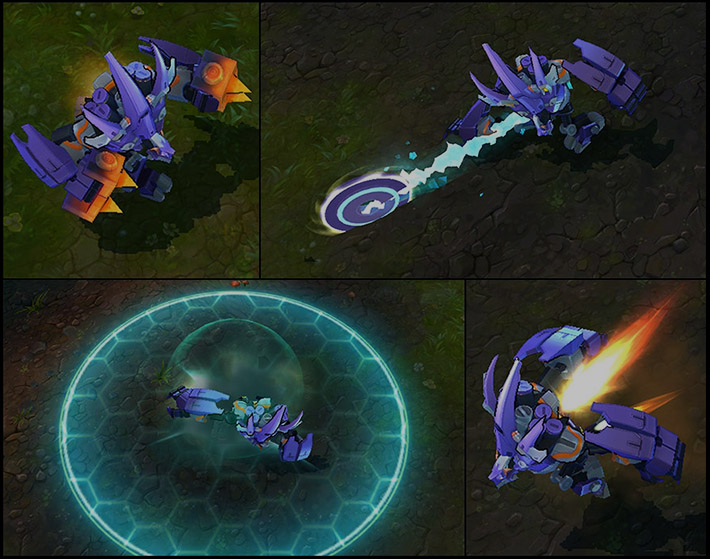 And I can say that the designers perfectly coped with their work. With these new animations, sound and visual effects, we received a completely different champion – Prototype 06 | Mecha Maplhite. The price is certainly high, but when did it stop the real collectors?

You can buy Mecha Malphite skin for 1350 RP in the LoL in-game shop. 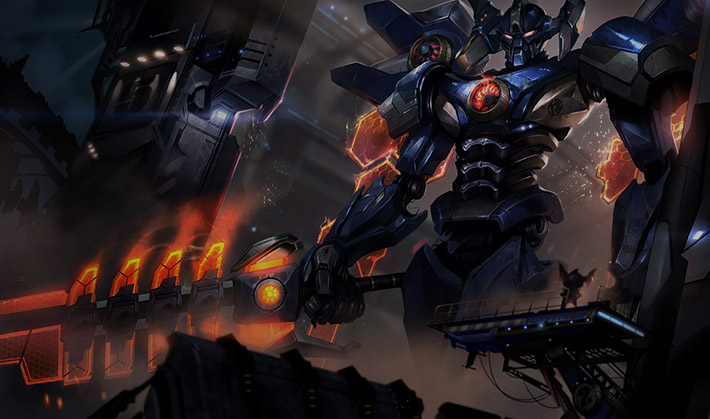 Personally – Aatrox is not the champion whom I would like to see in the role of a huge combat machine. Although designers have handled with their quite well and Darkin Blade do not just look like Mecha Warrior, but also feels like it.

New animation for Dark flight and recall push this skin further into Transformer territory. The new particle effects, along with the appropriate sounds, only emphasize his new theme. Separately I would like to mention the Mecha Aatrox during the Massacre, where designers show everything that this cybernetic warrior is capable of. But still there are some cons in this skin, for example, the particle effects of abilities Blood Thirst and Blood Price are too small and seem fragile.

Resulting, I would say that Mecha Aatrox is a casual skin and I would not advise buying it, but the Massacre changes everything. In the time of the action of this ability, Mecha Aatrox looks just divine.

You can buy Mecha Aatrox skin for 1350 RP in the LoL in-game shop.