Our chart of top5 most annoying League champions.

In this fun guide you will see our chart of top 5 most annoying LoL champions. All champions in LoL are well designed however some mechanics can annoy you when you face them in your games.

Do you see this creepy Blitzcrank in the bushes who is preparing to grab you? Just look at those eyes – he also sees you! Blitzcrank is able to change game outcome with one

Rocket Grab. This can annoy anyone! Blitzcrank can miss his grab or you can dodge it but when he hits – you are receiving knock up following by silence while enemy team focus you. Such unenviable fate!

There is the old but really amazing and fun video how Blitzcrank is trolling enemies! This video proves why this champion can be very annoying.

Yorick is not popular champion nowadays but this doesn’t change the fact that he is one of the most annoying champions in LoL. Meet these 3 guys

who will constantly chase you making you hide in the bushes! Great sustain allows Yorick to stay on a lane and poke you until his mana is gone. Due to his ultimate you have to fight Yorick twice or run away when you killed him. He is the most spamy champion in the game who is also able to summon a copy of himself making you fight against 5 units at once. Add to this list ressurection which allows him or his allies to chase you even after his death.

There is a nice YouTube video where Yorick with custom cake skin shows his performance. It’s very fun to watch!

The most simple ultimate in the game which will reach you anywhere and which you can’t prevent if Karthus is already in his spectral form. Of course there are few ways to evade it using non-target mechanics but they aren’t so widespread. There are few Karthus players in solo queue due to hard lane phase for him and high dependence on the skillshot accuracy. However this doesn’t mean that Karthus donesn’t annoy, especially when you have an even fight on your lane and he casts his utlimate to solve the outcome of the duel in the favor of your enemy.

BONUS: We decided to include a short Karthus guide as bonus to chart of most annoying champs:

Shaco is a pain which appears from nowhere. He has one of the most effective and unpredictable gank mechanics at the early stage of the game due to combination of gap closer and invisibility in one spell –

Deceive. Shaco is able to counter-jungle by setting traps in the enemy side with help of his

Jack in the Box. Also

Deceive is very strong escape tool which makes experienced Shaco players almost elusive. Ultimate allows him to take Dragon alone in a sneaky mode. When it comes to split push you often can see like part of the enemy team chasing Shaco and often without result. Sometimes, it seems like Shaco was created to annoy.

We recommend you to watch short entertaining YouTube video with bait which was made by Bard and Shaco:

And the winner of our chart of the most annoying LoL champions is . Why? Because shrooms! Shrooms, shrooms are everywhere! Everyone experienced situation when he steped on the first shroom and after a moment he steped on the second one which in turn led to a huge HP lose. High mobility allows this little hamster to use hit and run strategy constantly while his passive allows Teemo to make a surpise in the most inopportune moment. Don’t forget that AD carry can become almost useless for 2.5 seconds because of

Some players even tryed to exorcise the devil from Teemo but it was an unsuccessful attempt. 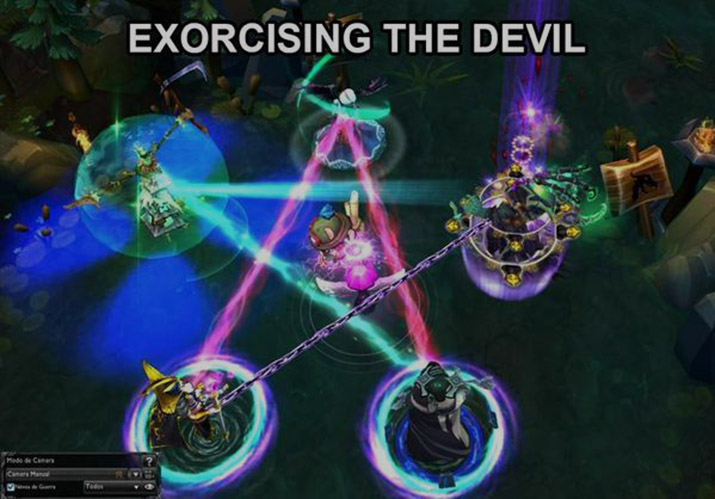 And as bonus there is very fun video with full AP Teemo journeys among LoL battlefields:

This is our chart of most annoying champions but what champion do annoy you most? Share your thoughts in comments!

The following content and services we provide may interest you: