Cosmic | Defenders of the Universe

We have already visited the world of the Dystopian future where tremendous robots are fighting against enormous mechanical monsters. In a world where the strongest, worthy champions can undergo modernization in order to free their true powers in exchange for their essence, and where the safety of the time itself is under vigilant supervision.

This time we will continue reviewing the skins of an alternative version of the LoL world. So let’s look in the depths of space where our champions were born.

Cosmic is a series of Alternative Universe skins, which represent champions as ethereal life forms that were born in the depth of space.

Initially, these skins were conceived as a divine embodiment of famous champions, but when the developers looked at the concept arts they thought that they could be connected with the already released line of skins – the Dark Star. And it was a damn good idea to add an opposing side and create a kind of conflict. 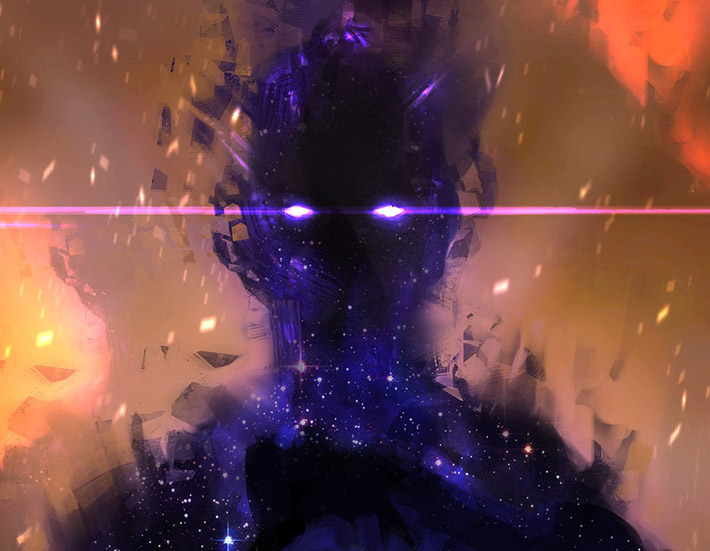 The Dark Star shows the champions as entities that consuming the stars themselves until there is only one original and eternal darkness remains, emptiness instead of stars. But why no one is standing against them? And it was decided to create a Cosmic series, ethereal entities that were created to protect the universe from the onset of eternal darkness.

In the whole universe, you will not find a single creature like them. Born with the first light, they will be here until the Universe fade away. Eternal, all-powerful, from the very beginning of the universe, they protect it from the emptiness and from the monsters that lurking in the eternal abyss.

Cosmic Reaver Kassadin protects the balance of power in his possession. With the help of the astral blade, he can control the power of the stars themselves to serve the cosmic justice to any entity that intends to upset the balance.

Cosmic Blade Master Yi moves from star to star and looks for any manifestation of the abyss on the stars. In his hands a weapon of unimaginable power, which is so acute that it can pierce the very fabric of reality itself. A flash in the sky sweeps from one star to another and cuts off the tentacles of the abyss, stretching to absorb our world, and then the entire universe.

Cosmic Dawn Rakan and Cosmic Dusk Xayah personify the beginning and the end; Alpha and Omega. They are always together, but inaccessible from each other. And their total strength is dimensionless.If any force tries to divide or destroy them, they will be incinerated by the fury of a thousand suns or thrown into an eternal emptiness.

By the way this list is sponsored by Boosteria company, quick elo boost provider.

And as always there is not a rich set of new summoner icons that waiting for us, one for each champion, and Riot Games do not even make any ward skins.

Only four champions were honored to protect the universe from threats from outside. And today I will describe in detail all the advantages and disadvantages of these beautiful skins. 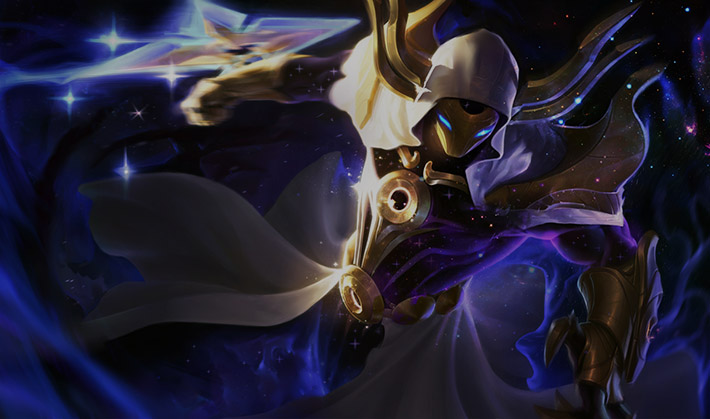 Under the twinkle of the Southern Cross, Cosmic Reaver Kassadin rises to bring balance to the cosmos. With astral blade in hand, channel the power of the stars as you serve cosmic justice to your opponents.

The very concept of the all-powerful cosmic being looks very cool, and high-quality splash art causes a rapid flow of positive emotions. But the in-game model of the Cosmic Reaver Kassadin does not reflect all the splendor of his divine origin. The design of the clothes, the small details of the mask itself are different from the ones, that were proposed in the splash art, and the overly precise champion’s model does not fit in the mystical nature of its owner.

New visual effects as always include the particle effects for his abilities since the animations were changed only for the recall and for death. The new effects of Cosmic Reaver Kassadin’s aura and Nether Blade abilities look exactly how you would like to see them (judging by the splash art), and this makes it even more painful that designers made so poor and ordinary in-game model. Okay, back to visual effects. They are executed quite qualitatively, but still very much resemble the classical version with their colors and structure.

But the sound effects are just wonderful. It’s the new sounds and animations keeping this skin from inevitable oblivion. The Recall is now accompanied by the astral radiance of the Southern Cross and it looks quite impressive. And the new animation of death simply fascinates with its beauty, that I want to run and die again and again.

Summarizing all of the above, I can say that Cosmic Reaver Kassadin is a skin with truly great potential, but with the mediocre execution. This is pretty expensive skin and the desire to buy it without a discount will only appear in the most dedicated fans of the Void Walker.

You can buy Cosmic Reaver Kassadin skin for 1350 RP in the LoL in-game store. 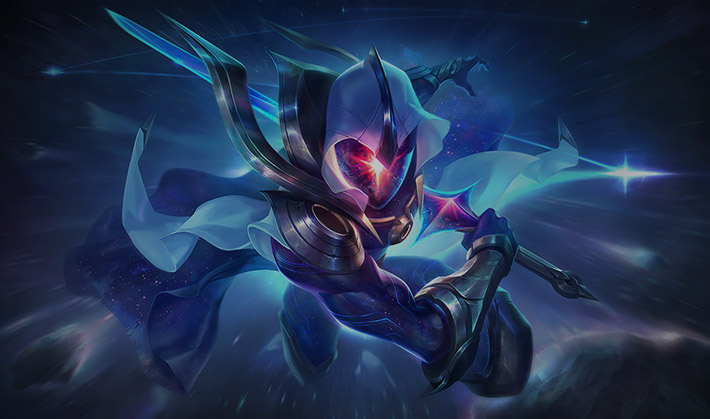 Gliding effortlessly from star to star, the Cosmic Blade flashes through the night sky with celestial grace, his blade arcing with crystalline precision through the fabric of the universe itself.

Cosmic Blade Master Yi repeats all the same mistakes as the previous Cosmic Reaver Kassadin. Huge but misused potential. Champion’s model is oversaturated with all sorts of details and he does not look like a Cosmic Blade but as a bad parody on a bad superhero. But still, the designers did a great job and the character in this skin feels differently.

Let’s move on to visual and sound effects. Particle effects that were added are working exactly as they should be. But the Alpha Strike’s “upgrade” is pretty confusing. This ability turns your champion into a small flash, and it looks ridiculous. But WuJu Style completely fits into the concept of the Cosmic skin and looks just great. The animation of the Recall was changed, but it does not cause the same feelings as in the Cosmic Reaver Kassadin case. Yes, it’s nice animation but nothing more.

With sounds, the situation is not so unambiguous. They seem to be done with due diligence, but the auto attacks and Alpha Strike do not sound exactly as I imagined. These sounds of the little bells are not what I expected to hear when Cosmic Blade Master Yi hit enemies with the sharpest sword in the universe. 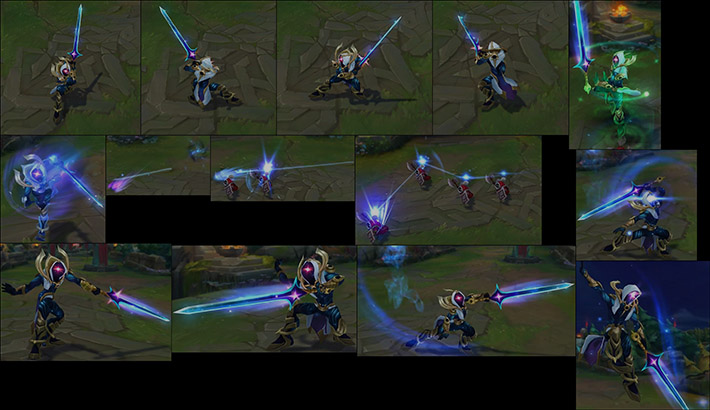 It’s time to finish with my little review. Despite all the disadvantages that were noticed, the Cosmic Blade skin still is not bad at all because of its interesting design and a new approach to the character. I recommend it to buy, if you are interested in the cosmic style, otherwise it is better to wait for the sale.

You can buy Cosmic Blade Master Yi skin for 1350 RP in the LoL in-game store. 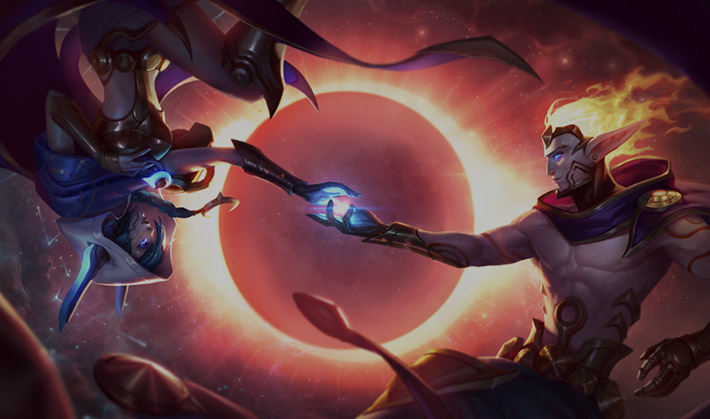 Although this couple was released not so long ago, the Riot Games decided to give them a gift and released a pair of Cosmic Skins. It is immediately evident that the developers don’t have enough time to think through the concept in details and the difference between this pair and the rest of the skins in the series is obvious. I’ll highlight Xayah later, but for now, let’s pay closer attention to our fiery peacock. Cosmic Dawn Rakan is not much different from his classic version. Similar clothes, similar color schemes. That’s just the fire particles were added to his hair and cloak-wing feathers. And the astral textures were added to somehow fit this image to the others. The blue cloak-wing is the only bright place of this skin, as it contrasts with other items and looks fresh and different.

Designers of visual effects were as lazy as they can while creating this Cosmic Dawn skin. Particle effects almost repeat the original ones and it is uneasy to detect the difference at the first glance. But still, positive changes also occur, for example, Gleaming Quill and The Quickness now look much more beautiful.

It would be possible to hope for an excellent audio accompaniment of the Cosmic Dawn Rakan, but it looks like that SFX department competed with the VFX department to find out which of them could do less work for this skin. Sounds became a little deeper and higher in those places where you need to, but in general, it’s all the same original Rakan’s sound effects. 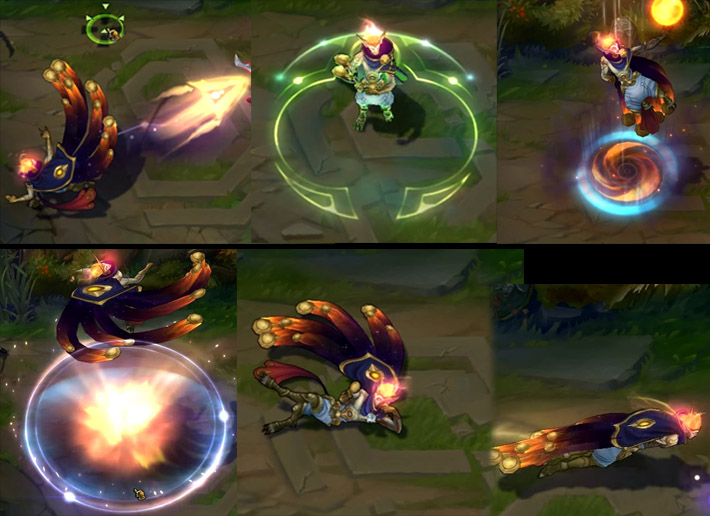 Well, I think you understand from my little story that this skin needs to be bought only if you heavy Rakan player and want to change him, at least somehow, to enjoy the game further. In all other cases, I strictly do not recommend to purchase Cosmic Dawn Rakan skin.

You can buy Cosmic Dawn Rakan skin for 1350 RP in the LoL in-game store. 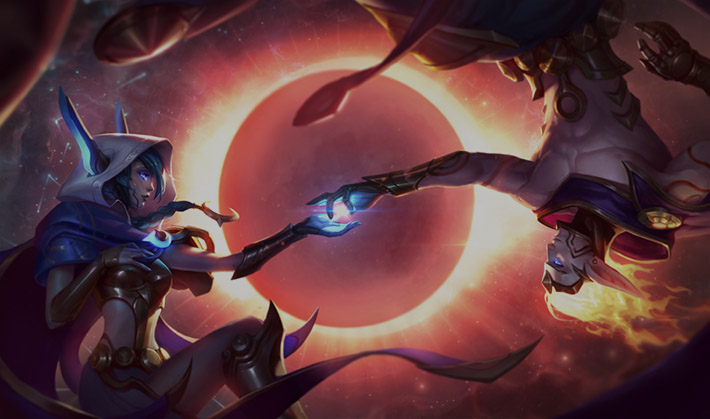 Cosmic Dusk Xayah did not get better attention from the developers. Its new skin that again does not felt Cosmic as it should be, it is simply improved classic one. Like her lover, Xayah’s model has remained almost classical, not counting a couple of details. Cosmic Dusk is more colorful than its classical version, but still the palette of colors is not the most attractive.

Let’s see what visual effects designers prepared for us. And here the are surprised me because they are much better than Rakan has. New effects add some personality to both skin and abilities. Oh, and also this skin has a nicely done Recall animation.

The sound is disappointing and is about the same as classical one has. It remained almost the same as it was, not counting some improvements. These changes are really limited.

Well, summing up all of the above, I can safely say that this is another, not the most successful skin in the Cosmic lineup. Cosmic Dusk Xayah is too close to the classical skin. Tha gameplay and feeling feels the same when you play as Xayah. Only buy it with a huge discount.

You can buy Cosmic Dusk Xayah skin for 1350 RP in the LoL in-game store.